“Shadow banking” activities, which have a relatively low share in Turkey’s financial markets, are closely monitored as they constitute a factor of vulnerability on a global scale.

Financial corporations engaged in shadow banking activities were among the triggers of the financial crisis that emerged in the USA in 2007 and assumed a global characteristic due to the contagion effect. In the banking sector, monitoring off-balance sheet credits in terms of the counterparty risk had become increasingly complicated while the leverage ratios had reached unsustainable levels. Therefore, the scope, monitoring and sui generis risks of shadow banking were included in the post-crisis reform agenda.

After a warning regarding the regulatory deficiencies in the shadow banking system was issued at the 2010 G20 Seoul Summit of Leaders, the Financial Stability Board (FSB) developed a two-step strategy in 2011. The aim of this strategy is to identify financial stability vulnerabilities with respect to shadow banking and enable the transition to resilient market-based financing. The first step includes the monitoring of shadow banking developments, which we will analyze in detail in this blog post. In this context, the size of shadow banking activities, their relationship with the banking sector, and the risks they pose are closely tracked via annual monitoring reports. The second step focuses on regulations addressing shadow banking activities. 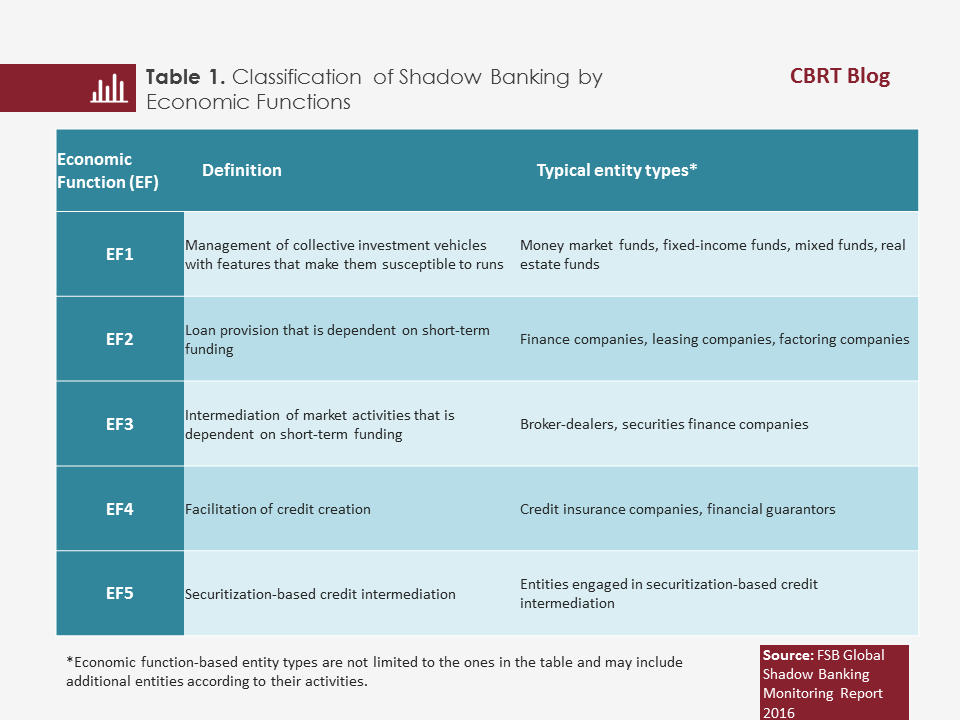 In the scope of shadow banking monitoring work, the Global Shadow Banking Monitoring Report 2016 was published in May 2017[1]. Data for the narrow measure of shadow banking in China, which has a significant size in global shadow banking, is lacking in this report due to the delay in data submission. In the report, data from 21 jurisdictions and the Euro Area are taken into account for OFIs while data from 27 jurisdictions are used for shadow banking. According to the report, the total size of the global financial sector reached USD 321 trillion, USD 133.4 trillion of which belonged to banks, USD 92.4 trillion to OFIs and USD 57 trillion to insurance corporations and pension funds. The global OFI distribution shows that OFIs had a higher share in advanced economies and China as of end-2015 (Chart 1). 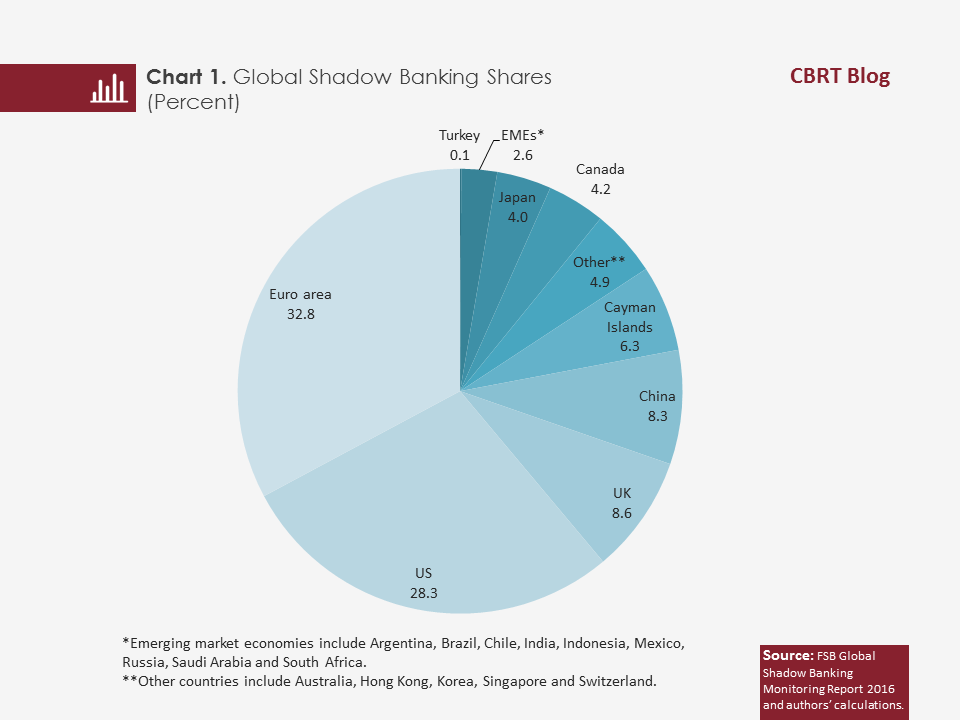 In the composition of financial sectors of emerging market economies, generally the banking sector has predominance while the share of OFIs in GDP significantly differs across countries (Chart 2). 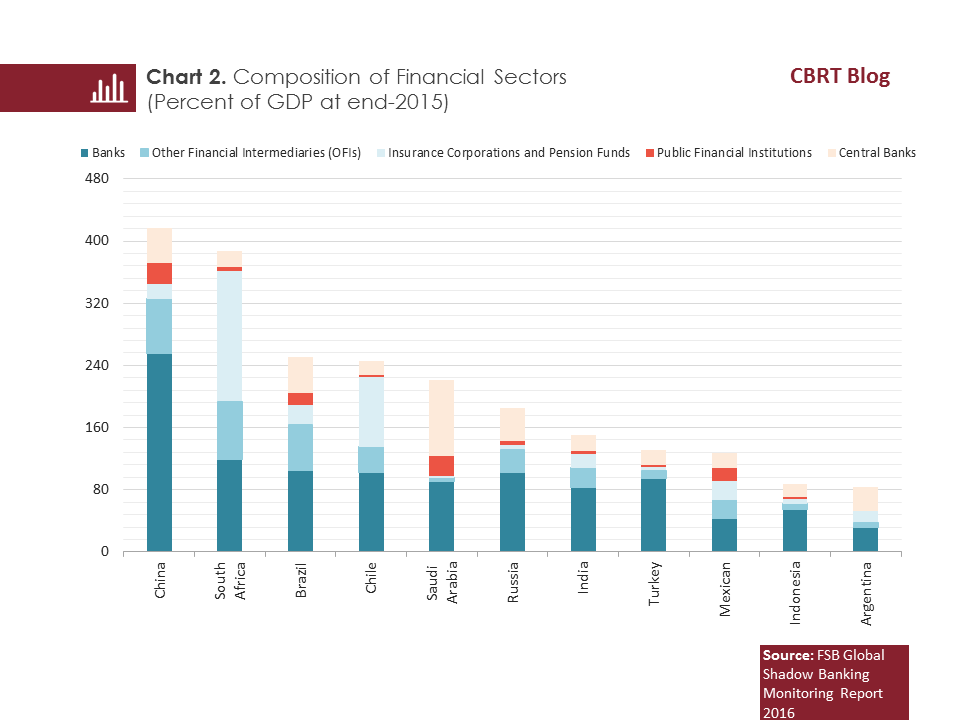 The collapse of Lehman Brothers once again showed the importance of close monitoring of financial interconnectedness. Accordingly, monitoring the interconnectedness between banking and shadow banking is critical to identifying the contagion effect of risks resulting from vulnerabilities. The relationship of assets and liabilities between banks and OFIs is used as a benchmark for the measurement of direct interconnectedness. OFIs’ claims on banks create a credit risk for OFIs and a funding risk for banks. The same goes for OFIs’ liabilities to banks. Chart 3 shows the credit risks and funding risks of OFIs as a share of their assets. 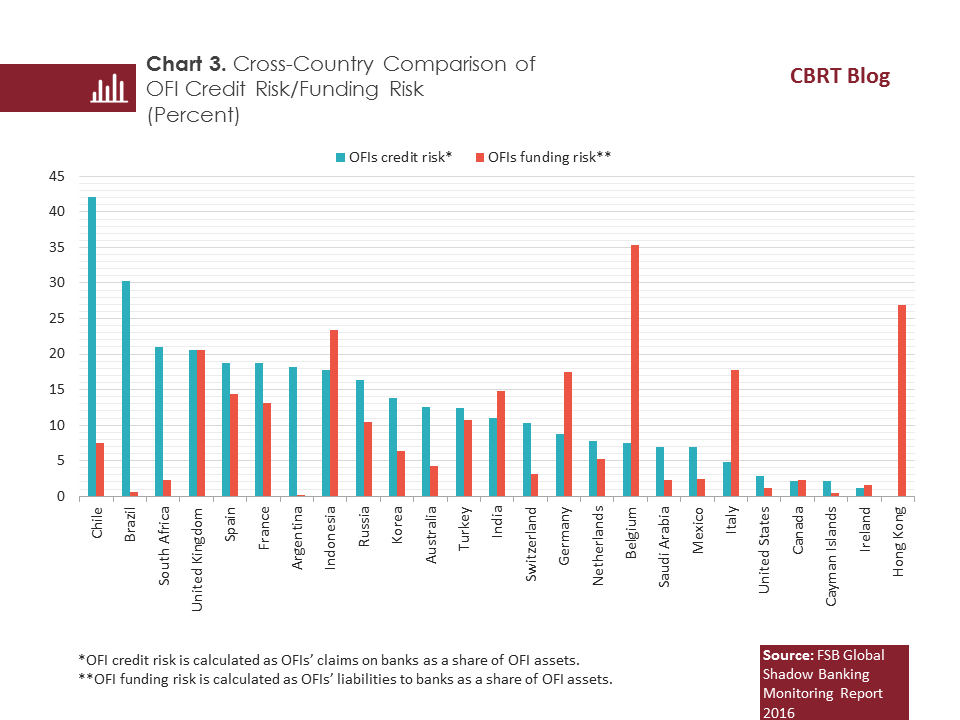 The size of shadow banking in Turkey is USD 50 billion. Approximately 65 percent of the global shadow banking size is composed of EF1 that includes funds (money market funds, fixed-income funds, balanced funds). On the other hand, in Turkey, the largest share (64.3 percent) belongs to EF2 that consists of finance companies, factoring companies and leasing companies, with a size of USD 32 billion as of end-2015. In the same period, the size of EF1-covered activities was USD 13 billion while the total asset size of shadow banking entities in EF3 comprising intermediaries stood at USD 5 billion.

The shadow banking sector in Turkey grew by 16 percent between 2011 and 2015. This rate is below the growth rate of the overall financial sector (Chart 4). On the other hand, entities facilitating credit creation (EF4) and entities engaged in securitization-based credit intermediation (EF5) are not yet engaged in activity in Turkey.

Although shadow banking entities are not subject to banking regulation, there are several policy tools addressing these entities to avoid vulnerability. The thematic peer review released by the FSB in 2016[2] presents information on the level of implementation of the FSB policy framework for shadow banking across FSB jurisdictions as well as the policy tools adopted by these jurisdictions. Accordingly, in Turkey, there are limits and restrictions on redemptions, investment in illiquid assets, leverage, maturity of assets, and asset concentration in the scope of EF1 as of the review period. Regarding EF2, the Turkish legislation includes regulations on capital requirements, leverage limits, limits on loan-to-value ratio and maturity of loans, internal systems, and accounting and reporting requirements. In addition, finance companies in Turkey are subject to reserve requirement regulation. 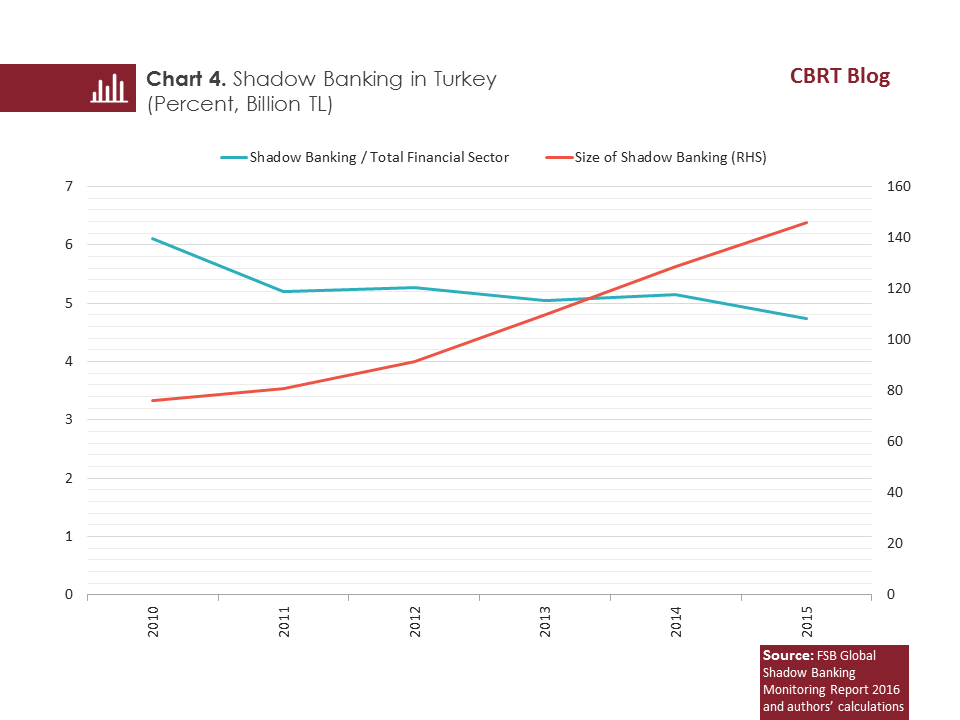 To conclude, as a lesson learnt from the global financial crisis, shadow banking should be closely monitored in terms of financial contagion and vulnerability. Work in this field is being carried out under the guidance of international standard-setting bodies. Although the size of financial assets classified as shadow banking is smaller in Turkey than in other countries and is subject to regulations by the Capital Markets Board of Turkey (CMB) and the Banking Regulation and Supervision Agency (BRSA), it is important that shadow banking entities are closely monitored from a systemic risk perspective.