We observe that global liquidity has an impact on the magnitude of interest rate transmission. Yet, financial regulation is strengthened on a global scale and macroprudential policies are implemented in a broader spectrum, which may have weakened this impact.

Salih Fendoğlu is an Economist at the CBRT.

Eda Gülşen is an Economist at the CBRT.

During the last decade, we have witnessed large fluctuations in global financial conditions. Financial concerns, which started to unfold in 2007, had turned into a global crisis by the last months of 2008[1]. In response to the crisis, advanced economy central banks, particularly the Fed, started implementing accommodative unconventional monetary policies.[2] In the following period, uncertainties regarding the evolution of these policies and the normalization process triggered fluctuations in global financial conditions beyond the historical norms. Meanwhile, policymakers in emerging countries, central banks in particular, introduced monetary and macroprudential policies to increase the resilience of domestic financial conditions and thus the real economy to these shocks.[3] On the other hand, some have proposed that the strengthened impact of increased global financial integration after the 1990s and the global factors on asset prices, balance sheets and credit conditions may restrain emerging central banks’ power to affect domestic financial aggregates in pursuit of domestic objectives (Rey, 2013; Rajan, 2014; Fischer, 2014; Obstfeld, 2015; IMF, 2017). In this paper, we aim to shed light on this issue within the Turkish context. In particular, we address whether global financial conditions affect the pass-through of monetary policy rates to commercial loan rates. 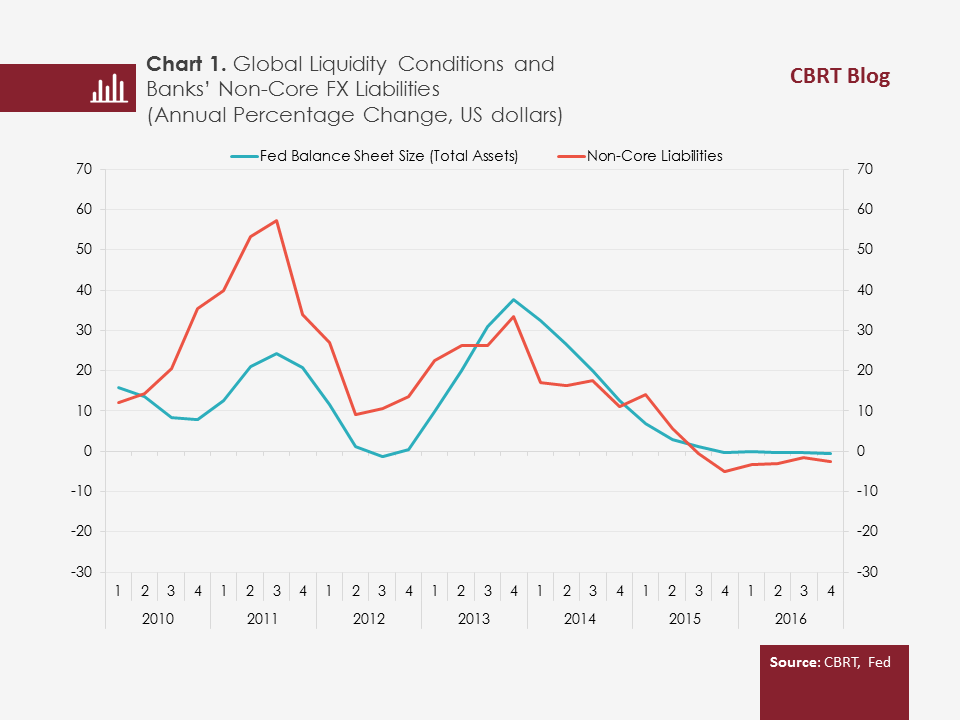 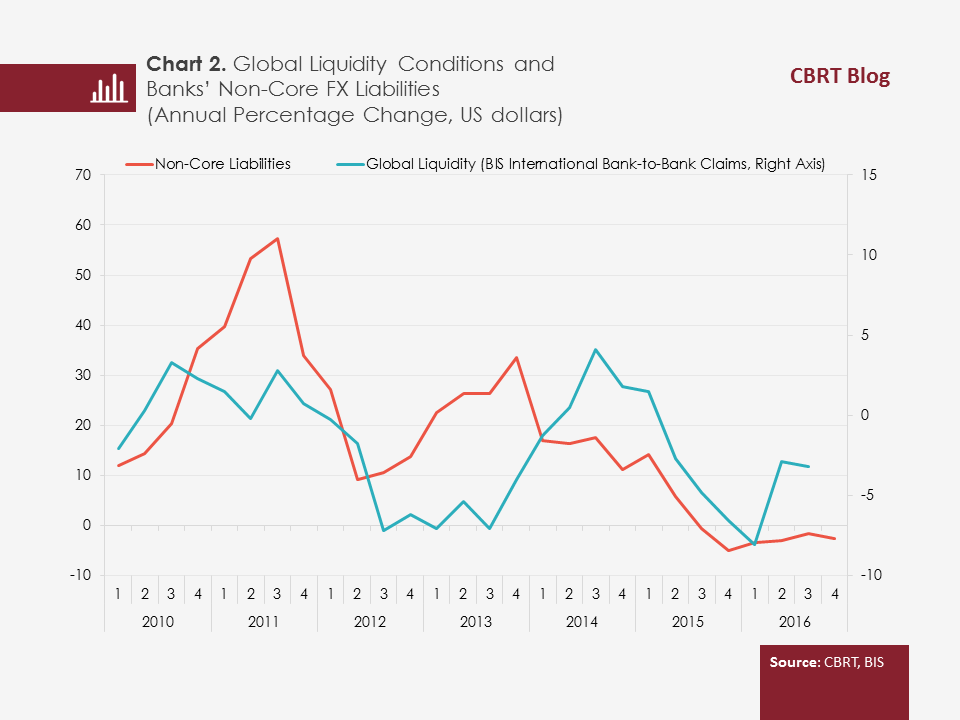 The Role of Global Liquidity in the Transmission of Policy Rates to Commercial Loan Rates: How to Measure It?

Commercial loan rates are, by definition, determined by demand (firm) and supply (bank) conditions. In other words, the characteristics of the loan-demanding firm – such as its size, leverage ratio, fixed assets that can be used as collateral, ongoing credit relations with banks, etc. – are influential in the loan rate to be determined, while the bank’s characteristics such as its size, profitability, experience in the sector and access to domestic and external sources also play an important role. In addition, macroeconomic variables such as the overall economic activity and inflation, or banks’ expectations regarding these variables may also affect loan rates. Considering that the monetary policy is effective on firms’ balance sheet/income conditions and macroeconomic indicators, the “observed” degree of the pass-through of policy rates to loan rates encompasses a variety of effects. In this respect, it is not easy to measure the effect of monetary policy on banks’ loan rate-setting behavior exogenous to indirect effects. We summarize the possible channels affecting this difficulty and interest rate pass-through in Figure 1. 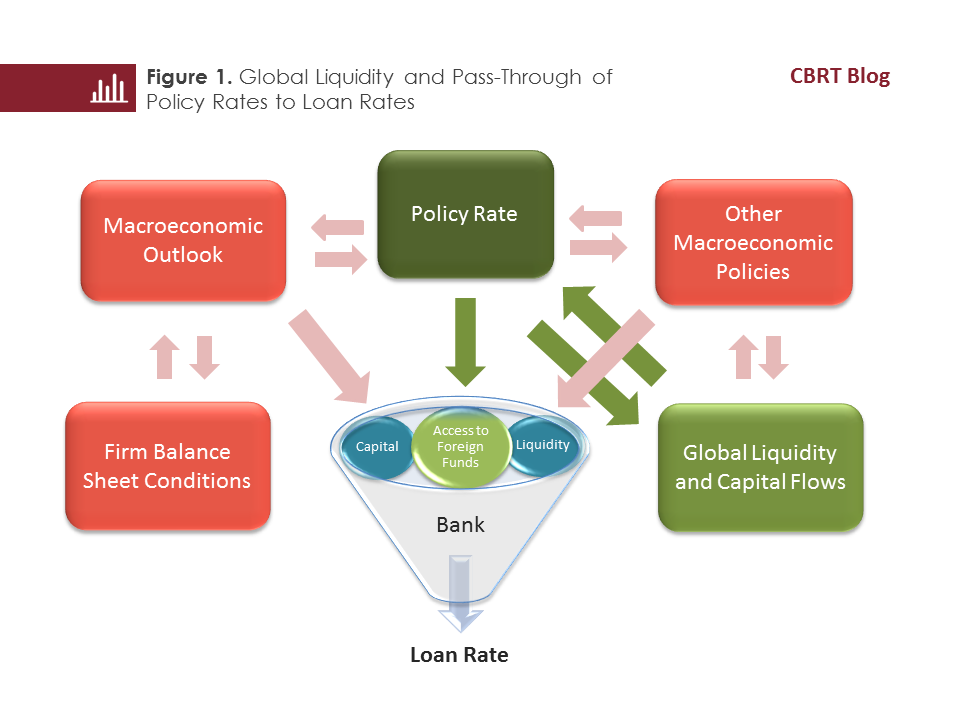 Experiences so far underscore the benefits of addressing heterogeneity in bank characteristics for an accurate measurement (Kashyap and Stein, 2000; Jimenez et al., 2012; Iyer et al. 2014). Hypothetically, let us consider two banks that extend the same type of loan to the “same” firm. Assume that one of them has higher access to global (external) fund sources while the other’s access is lower, with other characteristics of these two banks such as capital strength, liquidity condition, size, profitability, sectoral experience, ongoing loan relationship with the firm and the bank type (state, private, foreign) being identical. After a monetary policy tightening, these banks may increase the loan rate for the “same” firm differently. This difference points to the impact of exposure to global liquidity on the pass-through of policy rates.

To sum up, we observe that global liquidity has an impact on the magnitude of interest rate transmission. Yet, financial regulation is strengthened on a global scale and macroprudential policies are implemented in a broader spectrum, which may have weakened this impact.

[1] Also see Rajan (2005). Before the appearance of the first concrete signs of the crisis in 2007, Rajan had already pointed to the fact that new credit instruments, whose volume was rapidly growing, may have increased the risk appetite of fund providers and complicated the “accurate” risk measurement, thus leading to fragility in the global financial system.

Bernanke, B. (2012). Monetary Policy since the Onset of the Crisis. Jackson Hole Symposium Proceedings, Federal Reserve Bank of Kansas City.

Draghi, M. (2013). The role of monetary policy in addressing the crisis in the euro area. Speech at the “Room for discussion” of the Study Association SEFA and the Faculty of Economics and Business, Amsterdam.

Fischer, S. (2014). The Federal Reserve and the Global Economy. In Per Jacobsson Foundation Lecture, 2014 Annual Meetings of the International Monetary Fund and the World Bank Group.

Salih Fendoğlu is an Economist at the CBRT.

Eda Gülşen is an Economist at the CBRT.