A Micro Perspective on Wages and Labor Productivity

Recently, productivity gains have continued, while real wages have registered a decline. The impact of the changes in composition of employment and production structure is limited in these developments. The surge in productivity in the industrial sector is a favorable sign for inflation and growth dynamics.

Yusuf Emre Akgündüz is an Economist at the CBRT.

Huzeyfe Torun is an Economist at the CBRT.

Developments in average real wages provide policy-makers with significant information on cost and demand pressures on prices and give clues about the purchasing power of employees. The way to gain a better insight into real wage dynamics is to understand the components of labor productivity. As the changes in labor productivity affect inflation through the cost channel, they are important to the monetary policy. In this study we firstly examine the change in real wages over the years and the effect of employee composition on this change. Then, we analyze the change in labor productivity and the sources of this change. By using micro data sets to carry out these analyses, we also aim at disclosing sub-details of the relationship between wages and labor productivity.

Currently, the Earnings Index per Employee under the Labor Cost Index is published quarterly by the Turkish Statistical Institute (TurkStat). This index is constructed according to the responses of the firms operating in industrial and services sectors. Compiled by aggregated data, this index entails noteworthy information on general wage trends but does not focus on changes to arise in the characteristics of employees over time. Therefore, using the quarterly micro data sets of the Household Labor Force Survey (HLFS) between 2009 and 2017, we compute real wage series received by employees in our study. HLFS quarterly micro data cover every sector and entail detailed information not only about wages but also the factors affecting wages like age and education level. In this data set, as wages are based on the declarations of salaried and casual employees, it reflects net wage received by employees, and covers all employees either registered or unregistered. Through the real wage series we compute, we can observe wage developments in different sectors or demographic groups. Moreover, we can adjust for the composition effect of the variation among features of employees among periods on wages.

Changes in the employee composition may affect the course of average wages over time. For example, an increase in the ratio of college graduates within the employee pool may increase the average wages directly, even if no change occurs in the wages of employees of the same level of education. We filter out the impact of change in employee composition on the average wage level through the regression-based decomposition method (Aldan and Gürcihan-Yüncüler, 2017). The dependent variable is the hourly real wage that we obtain using the CPI. Explanatory variables are age, gender, marital status, education level, informality, experience, profession, permanence of the job and the sector concerned. 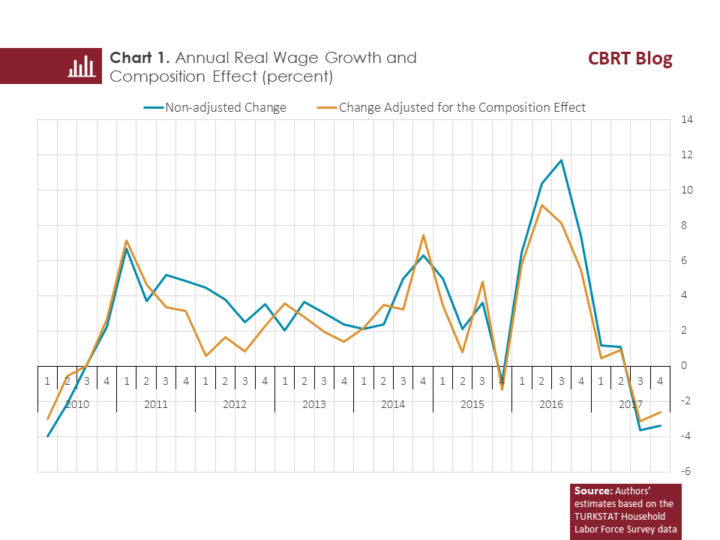 Weekly average working hour data of employees are also available in the HLFS quarterly micro data set. Thereby, we can obtain the data on quarterly total hours worked across sectors. We divide the total value added of sectors (GDP we obtain from Turkstat Gross Domestic Product statistics excluding taxes and subsidies) into total hours worked and derive a labor productivity index for the economy as a whole. Moreover, dividing the sector-based value added data by the total hours worked in the same sector, we construct sector-specific series. Then, we divide the changes in labor productivity into two components: intra-sectoral developments and reallocation of employment following Üngör (2011). The intra-sectoral component denotes the productivity gains to emerge when sectoral distribution of employment remains unchanged. The reallocation of employment component indicates the effect of direction of labor towards more efficient or less efficient sectors in terms of productivity. 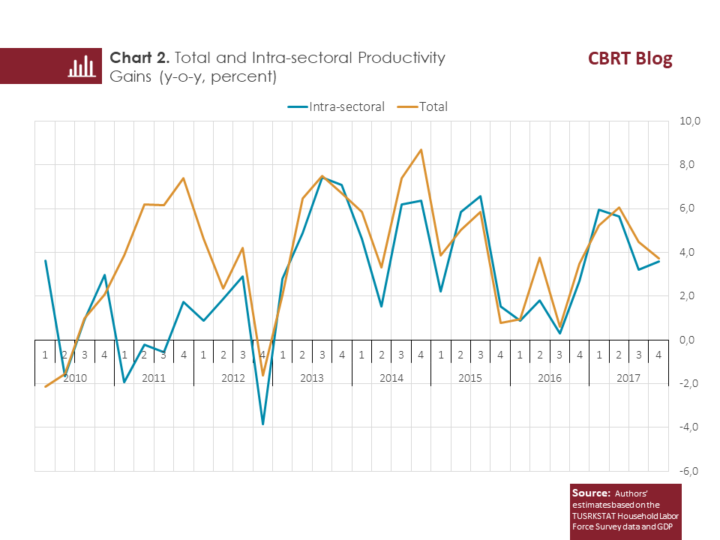 In the remaining part of the study, we filter out seasonal effects from the real wage and productivity series and construct an index taking 2009=100. Charts 3-6 demonstrate real wage and productivity developments in terms of the total economy and in comparisons based on main sectors (industry, construction and services). Charts also indicate the real unit wage index we obtain by dividing the wage index by the productivity index. The real unit wage index we construct shows the wage received by employee rather than the payment made by the employer per the produced value added.

In 2017, we see that productivity gains continued all over the economy, while the real wages declined. This points out that labor-market-driven inflationist pressures remain limited. Productivity in the industrial sector has assumed a trend of a sharp increase in the last couple of years. Wages on the other hand, remained flat following the rise stemming from the minimum wage rise in 2016, pulling down real unit wages. This indicates that the industrial sector retains its competitive power and is also consistent with the recent increases in exports. Productivity in the services sector records rather limited increases in the 2009-2017 period compared to other sectors. On the other hand, real wages, which went up due to the minimum wage rise in 2016, declined in 2017. 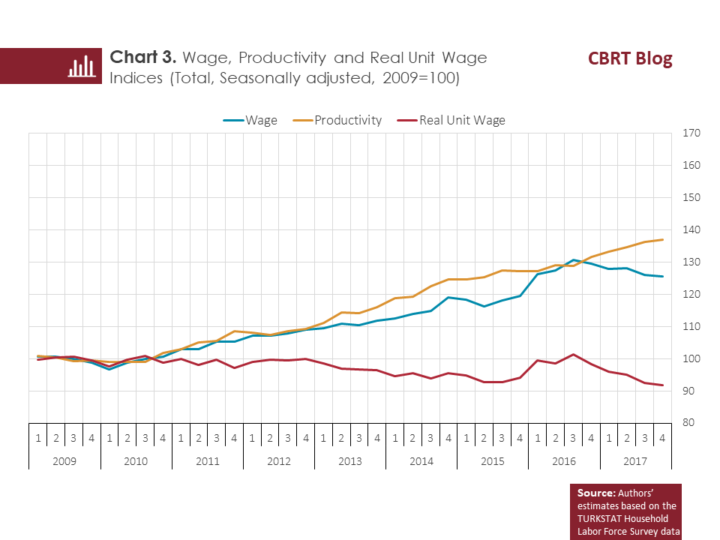 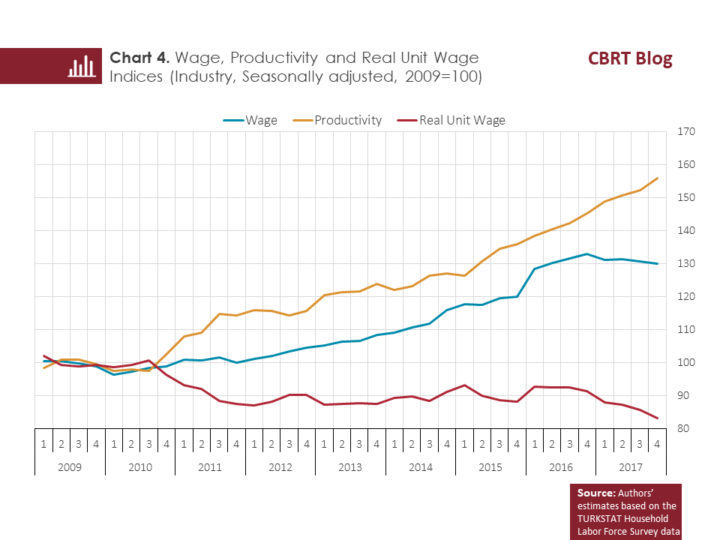 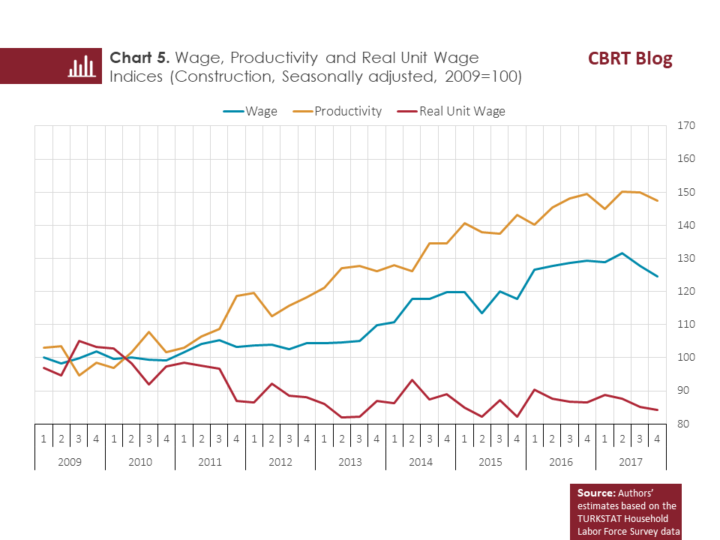 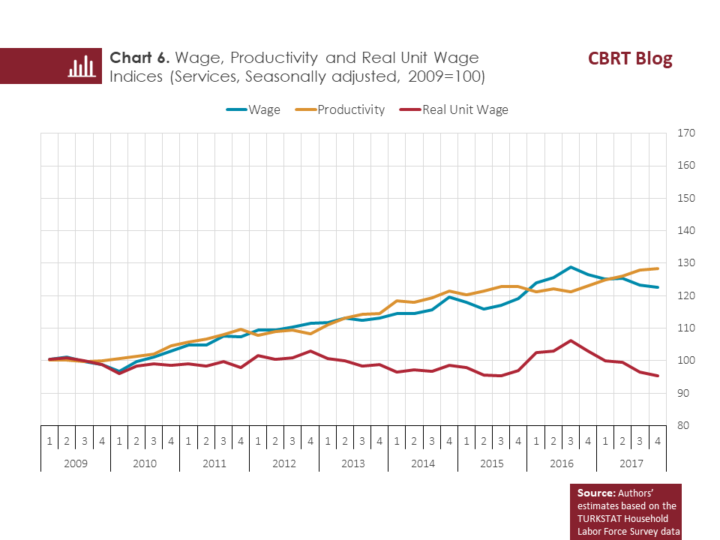 Huzeyfe Torun is an Economist at the CBRT.

Yusuf Emre Akgündüz is an Economist at the CBRT.