An Assessment of Revisions in Debt Statistics

This study gives a brief account of the scope and impact of the revisions to the statistics of Short Term External Debt, International Investment Position (IIP), Foreign Exchange Assets and Liabilities of Non-Financial Companies and Weekly Securities disseminated by the Central Bank of the Republic Turkey on 19 August 2021.

Serdar Erkılıç is a Director at the CBRT.

Hakan Hüsnü Toprak is a Specialist at the CBRT.

Eda Altuntaş Dursun is a Specialist at the CBRT.

Yahya Kocakale is an Assistant Specialist at the CBRT.

This study gives a brief account of the scope and impact of the revisions to the statistics of Short Term External Debt, International Investment Position (IIP), Foreign Exchange Assets and Liabilities of Non-Financial Companies and Weekly Securities disseminated by the Central Bank of the Republic Turkey on 19 August 2021. These revisions may help correct the biases identified in trade credits data by improving data quality, increasing compliance with international standards in securities and reflecting the short-long term distinction in deposits of non-residents into the statistics. Detailed information on the revisions is available in the Research Note in Economics[1].

The most comprehensive revision affecting external debt statistics was the compilation of trade credits due to exports and imports data from companies via direct reporting. Previously, export and import data according to the forms of payment released by TURKSTAT and trade credit liabilities reported by banks formed the basis of trade credit disbursements. Repayments were reflected in flow and stock statistics with the assumption of average maturity. However, although there was no structural change in Turkey's imports, there has been a remarkable increase in import payables calculated by this method in recent years (Chart 1). This situation may have occurred because companies reported some cash purchases as cash against goods in their customs declarations, and because of banks’ incomplete reporting due to difficulties in following up the repayments of imports with an acceptance credit and a letter of credit. 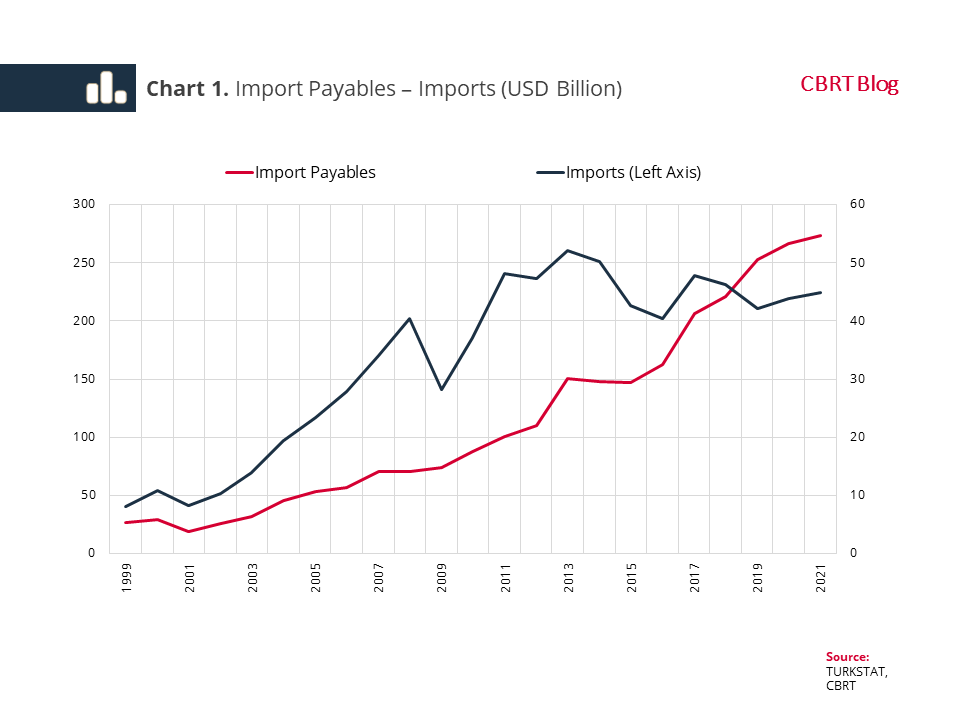 On the other hand, since 2018, the CBRT has been receiving reports on foreign currency liabilities and claims from companies in order to monitor their foreign currency positions. The fact that the foreign trade debts reported by these companies, which represent approximately 40-45% of Turkey's total exports and imports, are well below the values in the previous practice supports the suspicion of bias in trade credits.

Comparing the ratio of trade credit liabilities to imports across countries, Turkey's "Import Payables/Imports" ratio is well above the average and median values of developed and emerging countries (Chart 2). While the 2020 average of emerging countries is 13% and the median value is 9%, the same rates of developed countries are 10% and 8%, respectively. The ratio of Turkey's import payables to imports in the same period is 26%. 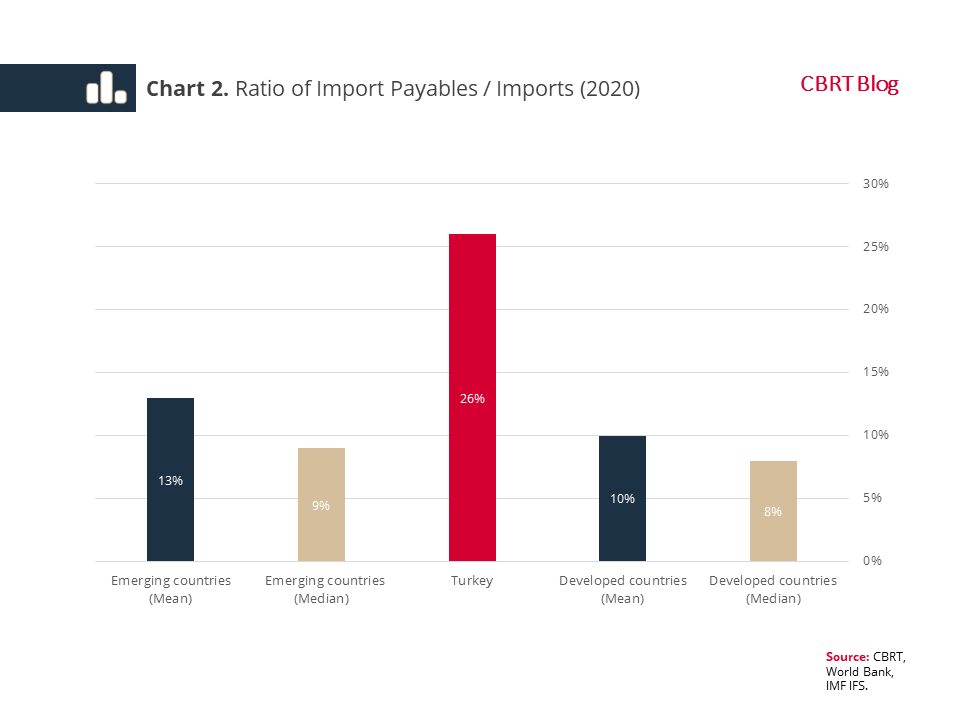 In order to correct the aforementioned biases in trade credits data and improve data quality, the CBRT initiated a study in 2020, in cooperation with TURKSTAT, to compile data at the company level with the direct reporting method, which is widely used in many countries. Companies that represent at least 80% of total import payables and export receivables were requested to report their trade receivables and payables quarterly in detail. The 2021Q1 survey was conducted with 8,971 companies and data was compiled from 8,869 companies with a response rate of approximately 99%. This company sample will also be used for the surveys in 2021Q2, 2021Q3 and 2021Q4. The 2021Q1 sample represents 81% of total exports and 86% of imports (Chart 3). 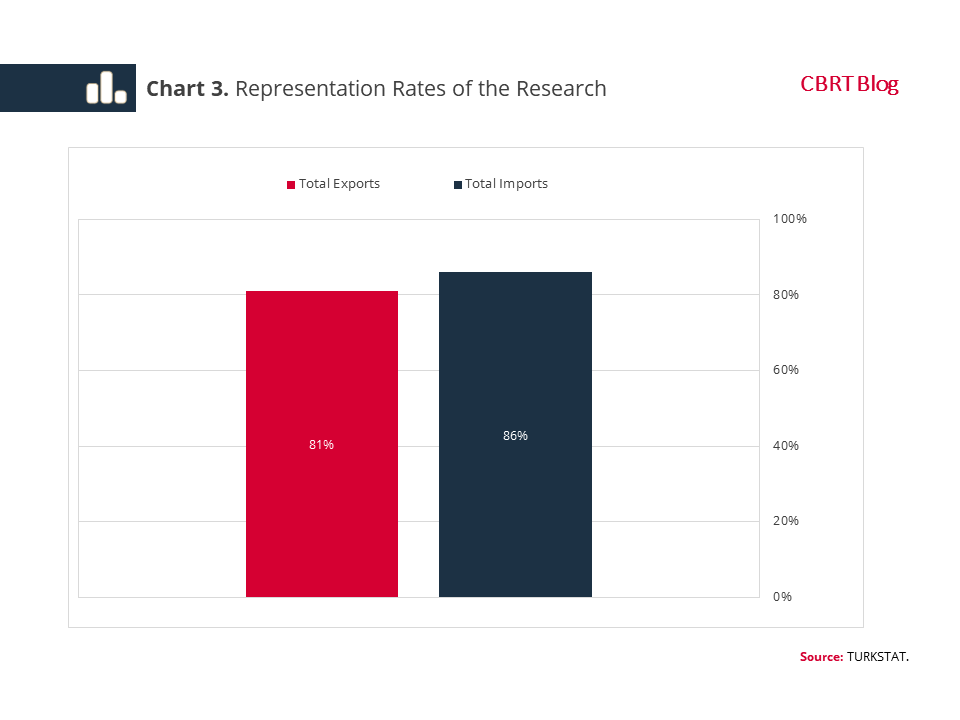 In this context, trade credits data for payables and receivables obtained through direct reporting were first expanded with the inductive method to ensure full coverage, and then historical time series were produced so that the statistics for which they are used as inputs could reflect them retrospectively (Chart 4). 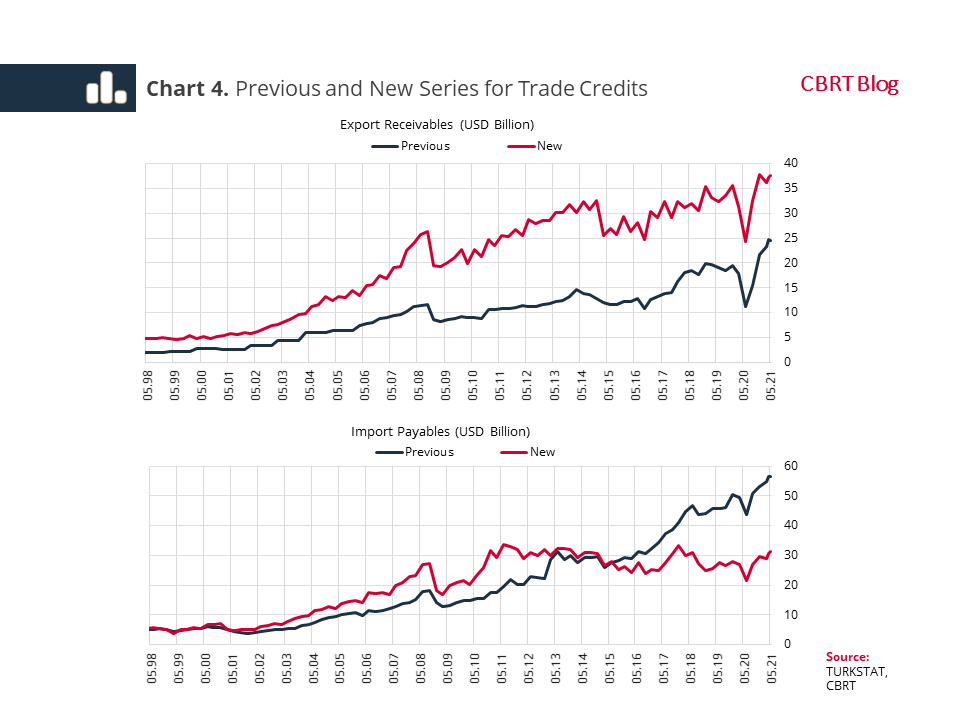 Besides revised trade credits data, to align them with the Securities Statistics Handbook (BIS-ECB-IMF, 2015), securities statistics are now compiled on the basis of "economic ownership" instead of "legal ownership" for the holder of debt securities. For example, when a security (Eurobond, government domestic debt securities-GDDS) changes hands from a bank to a non-resident as a result of a repo or lending transaction, the same standard of economic ownerwhip is now applied to both GDDS, and eurobonds, whereas previously legal ownership was applied to GDDS and economic ownership to eurobonds. The economic owner of a debt security is defined as the party that bears all the risks and benefits. In accordance with this new definition and practice, foreign resources and funds obtained through repo are recorded as a loan obligation for the bank. The economic ownership of the debt securities subject to repo continues to be bank. The disbursement of foreign funds provided through this way as a source of credit pushes the external debt stock upwards.

Another revision aimed at improving data quality was drawing a distinction between short-term and long-term deposits of non-residents in Turkey. In the previous practice, it was assumed that all foreign currency and TL deposits of real and legal persons residing abroad held by domestic banks were short-term. However,  there is a distinction in terms of maturity lengths, up to one year and more than one year, for the abovementioned deposit liabilities in bank trial balance sheets. In this regard, deposit items can be entered as short and long term into Banks’ Trial Balances. As a result of the study, long-term deposits have been removed from the Short Term External Debt table.

The net effects of the revisions made under these three headings on the statistics of Short Term External Debt, International Investment Position (IIP) and Foreign Exchange Assets and Liabilities of Non-Financial Companies are shown through previous and new series in Charts 5, 6 and 7, respectively. 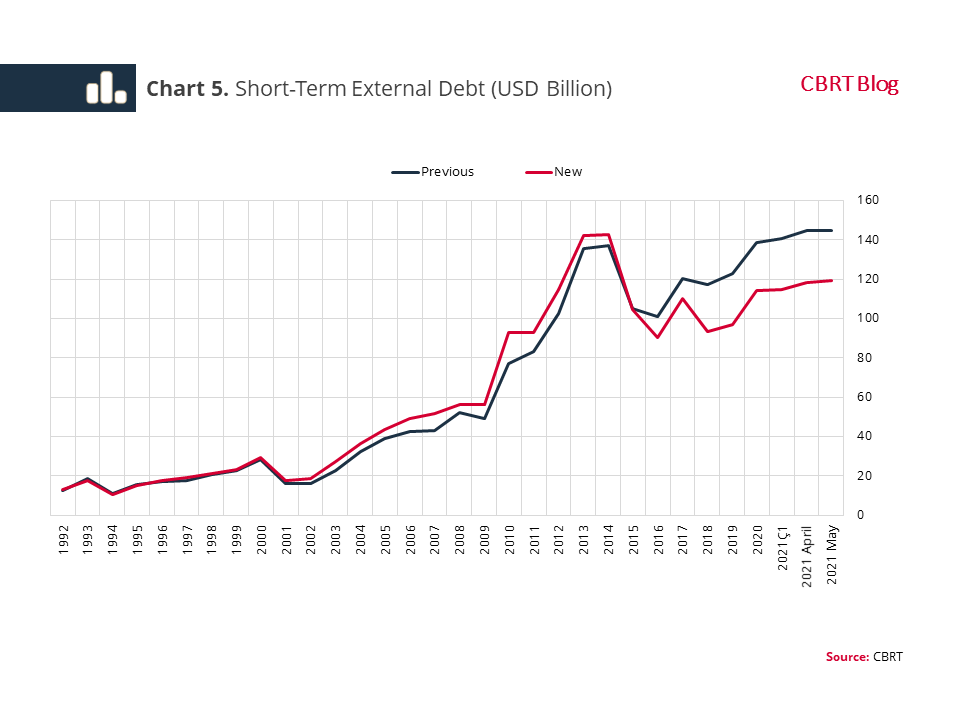 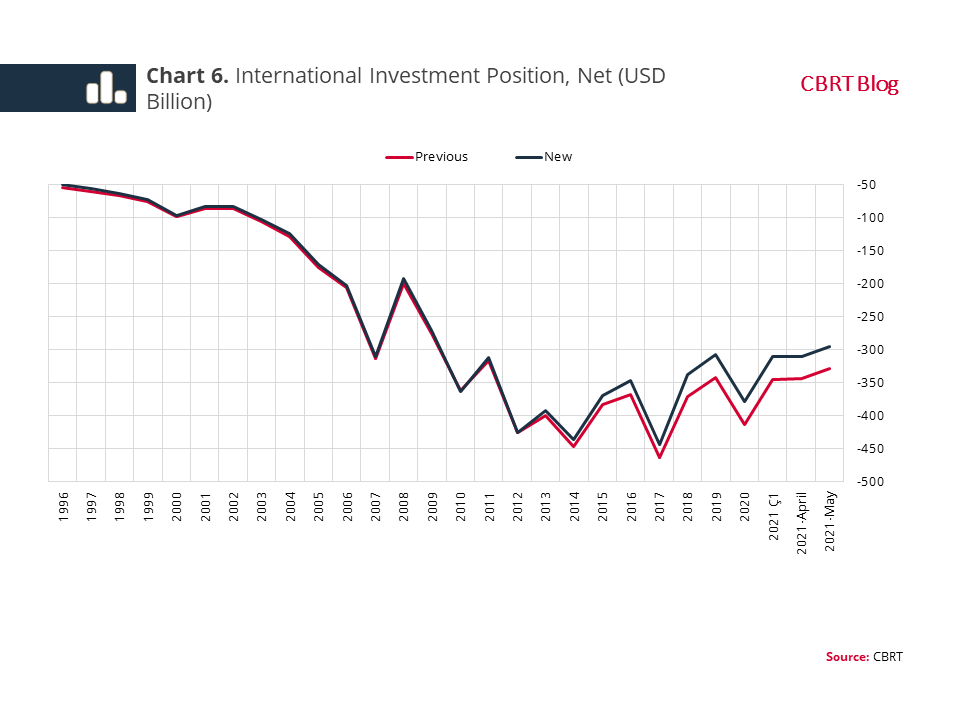 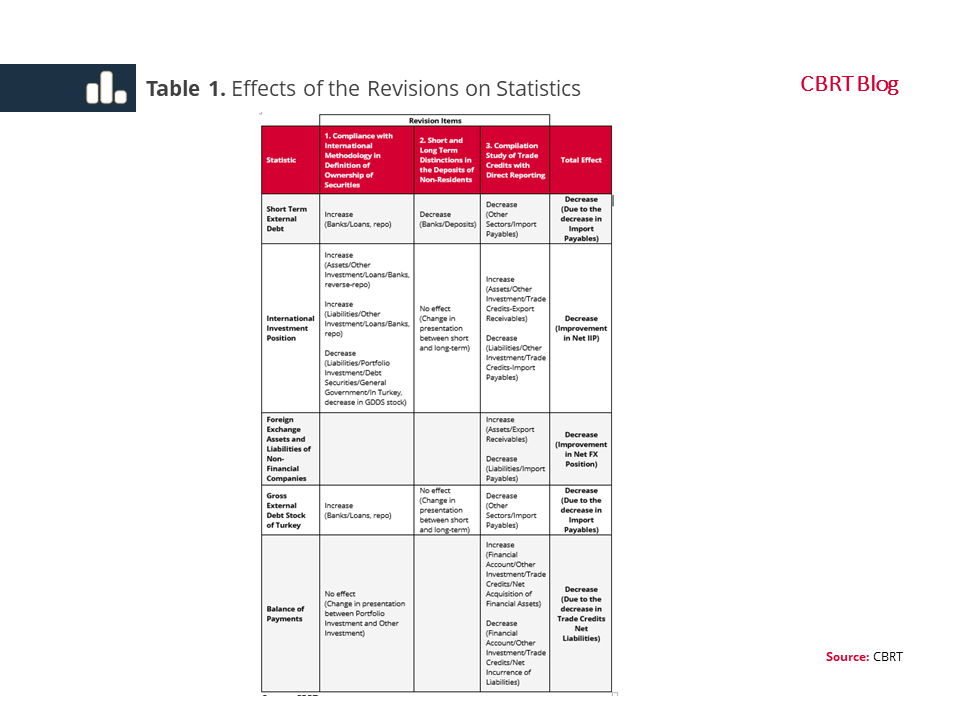 In summary, revisions made after access to new data sets and compliance with international methodology are expected to contribute to a more accurate determination of companies' debts and liabilities and help make more informed inferences regarding risk levels.

[1] CBRT, Research Notes in Economics, 19 August 2021, Trade Credit and Advances Due To Exports and Imports in Turkey: A Technical Evaluation of the Change in Data Collection Method.

Eda Altuntaş Dursun is a Specialist at the CBRT.

Serdar Erkılıç is a Director at the CBRT.

Yahya Kocakale is an Assistant Specialist at the CBRT.

Hakan Hüsnü Toprak is a Specialist at the CBRT.