Uğur Namık Küçük is the Chief Adviser at the CBRT.

İbrahim Ethem Güney is the Executive Director of the  Strategy and Corporate Governance Department of the CBRT.

Doruk Küçüksaraç is an Executive Director at the CBRT.

Forward foreign exchange contract is a type of derivative instrument actively used in financial markets to hedge against the exchange rate risk. The Central Bank of the Republic of Turkey (CBRT) has decided to launch Turkish lira (TL)-Settled Forward Foreign Exchange Auctions for the purpose of increasing depth in foreign exchange markets and supporting the effective management of the exchange rate risk of the corporate sector.

I. Use of Forward Foreign Exchange Contracts in Financial Markets

TL-Settled Forward Foreign Exchange contracts are a type of derivatives where the principal amounts are not exchanged between the parties on the settlement date and the transaction is based on the principle of cash settlement in TL. The use of this type of contracts has become very widespread in global financial markets and their share in derivatives markets has been increasing recently. According to the “Triennial Central Bank Survey of Foreign Exchange and Derivatives Market Activity” conducted by the BIS, average daily transaction volumes of these instruments reached USD 134 billion in 2016[1].

Among the purposes listed above, interim payments of the corporate sector are directly related to the foreign currency demand in the spot market. Other transactions are for hedging purposes and their natural environment is forward transactions. Empirical studies show that there is a mutual interaction between the forward foreign exchange transactions market and the spot market but the direction of the relationship is from forward towards spot market in periods of increased exchange rate volatility[3].

Data on global currencies presented in the “BIS Triennial Central Bank Survey” offer striking information about forward and spot foreign exchange transactions. It is noteworthy that a large portion of the total transaction volume in FX markets results from derivatives transactions such as forwards and swaps (Chart 1). This decomposition indicates that the majority of the transaction volume takes place for hedging purposes[4]. 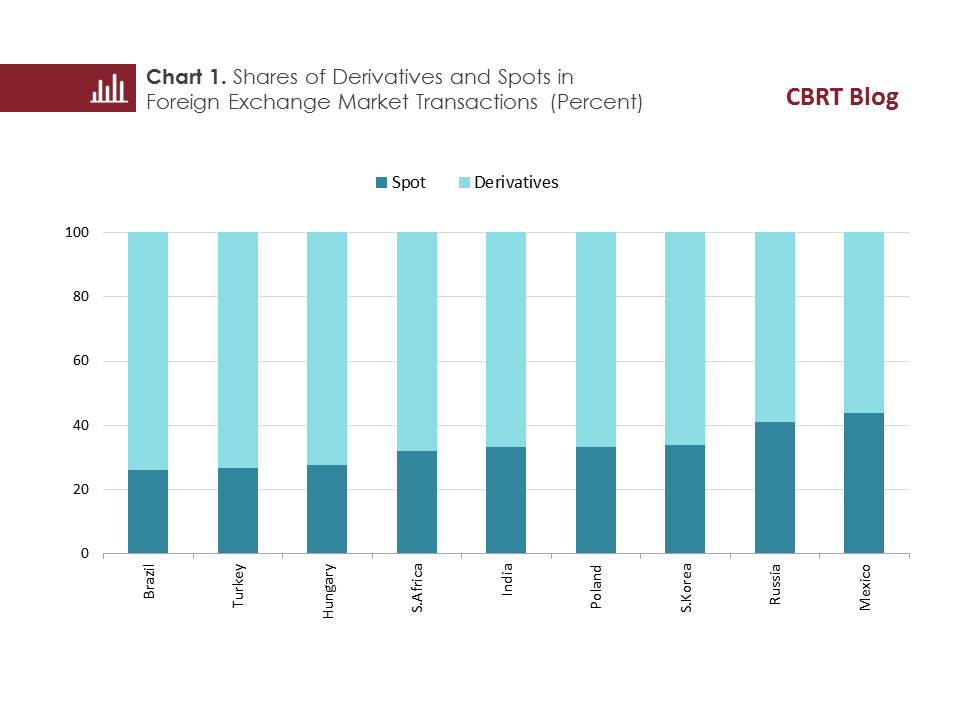 As explained above, increasing the depth in forward foreign exchange markets stands as a prerequisite for sustaining the FX market volatility at reasonable levels. In this respect, the TL-Settled Forward Foreign Exchange Auctions program announced by the CBRT is deemed a useful policy instrument in providing depth to the existing foreign exchange derivatives markets, which is crucial for the effective management of the corporate sector’s exchange rate risk and balancing excessive volatility in foreign exchange markets.

Forward foreign exchange contracts are derivative instruments which introduce a commitment to purchase or sell a specific currency against another one at an agreed forward exchange rate on a pre-determined settlement date.

In the framework of the program recently shared with the public, the CBRT will be in FX-selling position in these auctions while the auction-winning banks will be in FX-buying position. Banks will be able to transfer these long FX positions to the corporate sector and/or to the markets abroad by undertaking a reverse position. 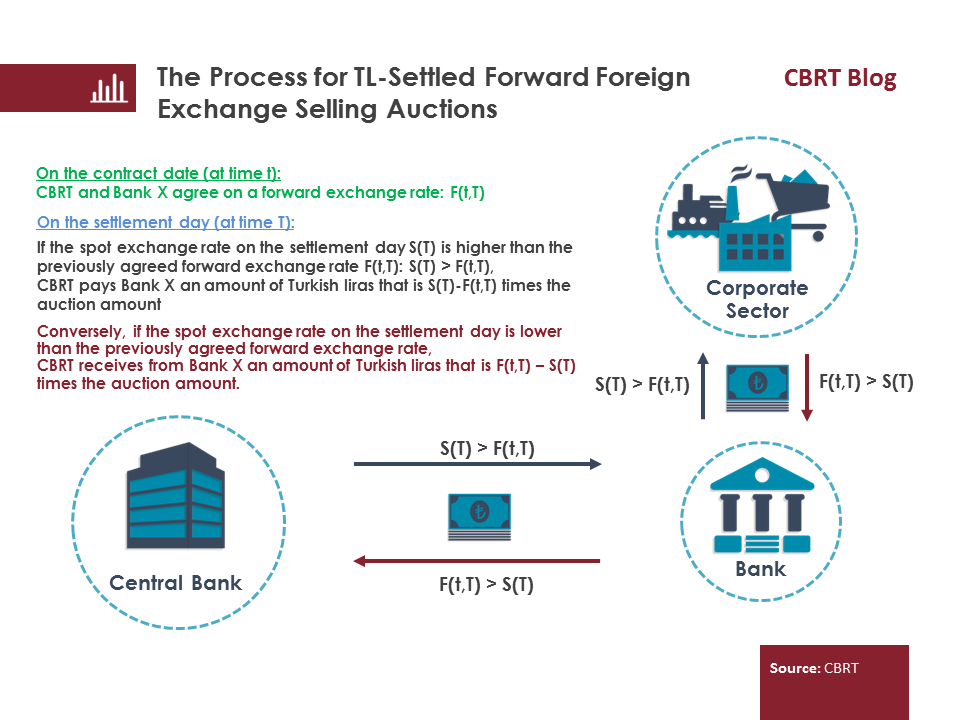 IV. What are the Potential Benefits of the Instrument?

Banks will be able to transfer the forward foreign exchange long positions that they have purchased from the CBRT to the corporate sector through the over-the-counter markets in Turkey or sell them in foreign markets. In this respect, the new instrument will contribute to stabilizing the impact of the hedging behavior that increases at times of heightened FX volatility in domestic financial markets. The new instrument can also support price stability by underpinning current policies through the alleviation of the fluctuations in foreign exchange markets.

The TL-Settled Forward Foreign Exchange Auctions are expected to support the corporate sector’s exchange rate risk management capacity by facilitating access to a simple, deep and efficient hedging instrument. Deepening of foreign exchange markets and efficient management of corporates’ exchange rate risk are in prospect to contribute to the monetary policy’s main objective of achieving and sustaining the price stability.

İbrahim Ethem Güney is the Executive Director of the  Strategy and Corporate Governance Department of the CBRT.

Uğur Namık Küçük is the Chief Adviser at the CBRT.

Doruk Küçüksaraç is an Executive Director at the CBRT.