Does the Infrastructure Quality of Highways Affect Regional Food Prices?

It can be asserted that improvement in highway quality decreases trade costs, increases trade volume between regions, and supports the functioning of the market economy by improving competitiveness.

The rate of increase and the volatility of food prices in Turkey do not only adversely affect the medium- and long-term predictability of inflation by distorting the general inflation outlook, but also restrict improvement in inflation expectations due to the high share of food in household spending. This has urged policy-makers to define the structural problems in price formation in food market more clearly and to seek more effective solutions.

The primary factor adversely affecting price formation in food is the indecisive and volatile trend of domestic supply stemming from seasonal factors as well as producer preferences and foreign trade. Moreover, there are persistent imbalances in the regional distribution of unprocessed food supply. One of the mechanisms that can curb deterioration in price formation due to supply volatility would be shifting shipment of products from regions with ample supply to regions with scarce supply; thus, benefiting from the stabilizing role of trade [Coleman, 2009]. Nevertheless, price disparities across regions display rigidity because of time and shipment costs of trade. How fast trade can be completed depends on the type of product and the quality of transportation infrastructure. Trade across regions in Turkey is mostly carried out via highways. When the quality of road infrastructure is low, it is natural to observe imbalances in the regional distribution of supply. Having difficult and costly transportation weakens inter-regional trade volume and makes the prices determined by local market dynamics plagued by imperfect competition. There is strong evidence that the improvement in Turkey’s highway capacity and infrastructure quality significantly increases trade volume [Coşar and Demir Pakel, 2016].

Our analysis examines the impact of the improvements in the quality of highway infrastructure on food prices (fresh fruits and vegetables) via the inter-regional trade channel, by using data from the General Directorate of Highways and TURKSTAT. The observation period is between 2005 and 2015. Regional price data is used for a total of 35 food products. The highway infrastructure quality is defined as the ratio of regional divided highway to the total regional highway network. Chart 1 shows the change in divided highway ratio across the country over the 2005–2015 period. The average divided highway ratio, which was 14.4 percent in 2005, became 33.9 percent in 2015. The rise between 2007 and 2011 is remarkable. The chart also suggests that Turkey significantly improved the quality of road infrastructure after the 2008 crisis. 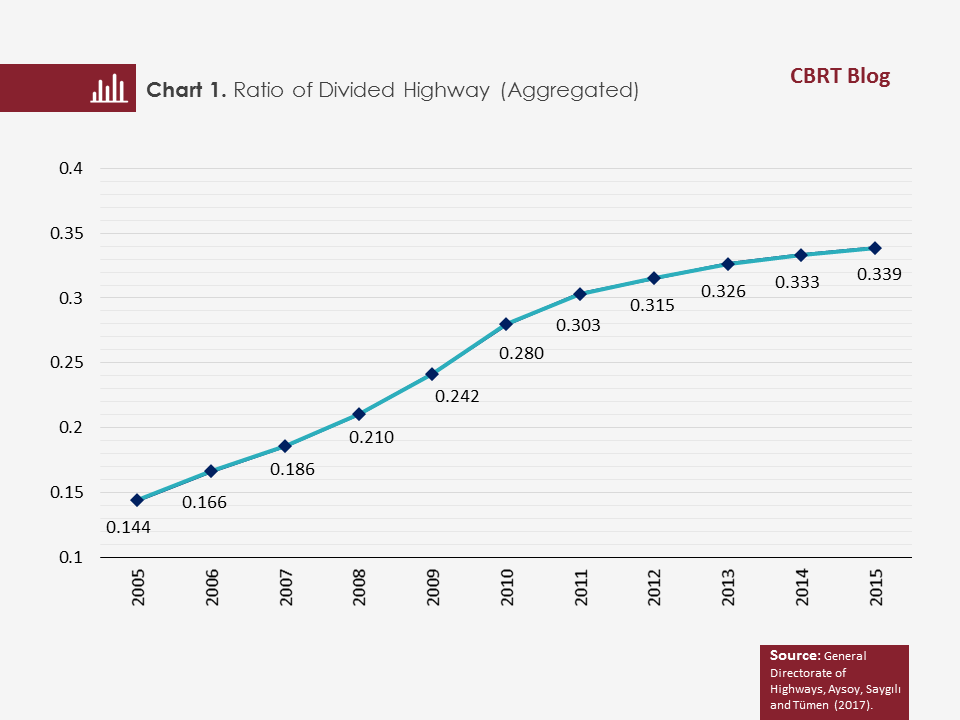 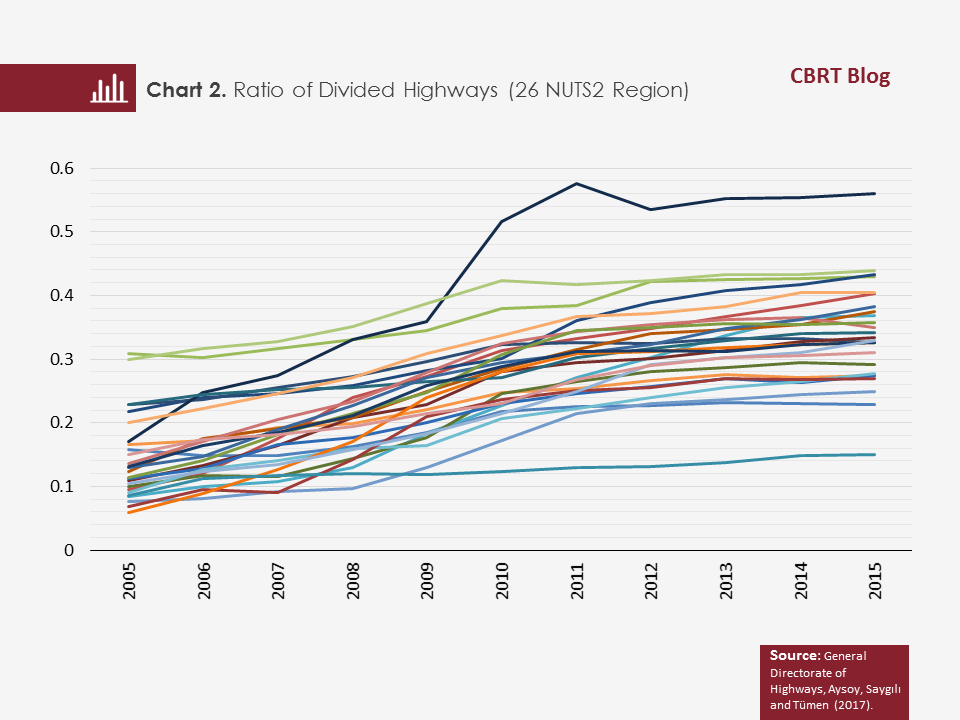 According to the results of the regression analysis, which are presented in detail in the Aysoy, Saygılı and Tümen (2017) study, a 10 percentage- point increase in regional divided highway ratio above the sample average[1] induces a 1.5 percent decrease in fresh fruit and vegetable prices. Both Chart 1 and Chart 2 show that the divided highway ratio has significantly changed over the 2005-2015 period both in cross-sectional and time-series terms. Over the 11-year time horizon, a 20 percentage point variation is observed in aggregated time-series, while regional differences reach as high as 25-30 percentage points across 26 regions at NUTS2 level. Therefore, the reported coefficient estimates point to an important price impact. The regression analysis has been repeated by grouping products into perishable produce (strawberries, cherries, tomatoes) and relatively non-perishable/storable produce such as apples, pears, and melons. While the results are statistically insignificant for perishable fresh fruits and vegetables, they are significant for non-perishable and storable products. Moreover, it was observed that the impact was higher in eastern and southeastern Anatolia, while it is lower in western regions. Although these findings may display peculiarities specific to Turkey, they are consistent with the generally accepted framework in the literature.[2] The regressions control for region, year, and product fixed effects as well as the variables representing time variation in regional characteristics and the course of regional economic activity.

In the related literature, it is frequently emphasized that the transportation infrastructure significantly contributes to regional development performance [Donaldson, 2017]. The findings that we derive from our analysis suggest that the recent large-scale investments in highway infrastructure in our country have been supporting the functioning of the market economy through an array of channels. That the impact is more pronounced for non-perishable food produce suggests that improved highway quality leads to more efficient regional distribution of storable food items and, thus, generates healthier price formation. The fact that the impact is higher in priority development regions is promising as infrastructure investments are mostly concentrated in these regions where development and welfare effects are most sought for. To conclude, it can be asserted that improvement in highway quality decreases trade costs, increases trade volume between regions, and supports the functioning of the market economy by improving competitiveness. The fact that the findings are directly related to food prices supports our hypothesis that improvement in highway infrastructure in our country generates healthy price formation in the food market.

Minten, B. and  S. Kyle (1999). “The effect of distance and road quality on food collection, marketing margins, and traders’ wages: Evidence from the former Zaire”, Journal of Development Economics, 60, 467–495.