Fed’s Balance Sheet Reduction Process: What is the New Normal?

The Fed started its balance sheet reduction program in the last quarter of 2017 and publicly announced its pace as well as its method. However, it did not make any commitment on the extent and deadline of this reduction. Following the recent slowdown in global growth, the Fed also suspended its policy normalization and announced that it would end the balance sheet reduction in September 2019 accordingly.In this note, we summarize that framework and evaluate its implications in terms of the balance sheet normalization.

İsmail Anıl Talaslı is a Central Bank Specialist at the CBRT.

The Fed started its balance sheet reduction program in the last quarter of 2017 and publicly announced its pace as well as its method. However, it did not make any commitment on the extent and deadline of this reduction. Following the recent slowdown in global growth, the Fed also suspended its policy normalization and announced that it would end the balance sheet reduction in September 2019 accordingly. Nevertheless, uncertainties linger over as to whether the Fed could bear for a long period a balance sheet of a size that is still larger than it was before the crisis and whether it will continue to downsize it when the economic recovery gains momentum. This decision that will also have implications for global liquidity conditions, hence emerging market economies, is closely related to the operational framework of the monetary policy that the Fed will adopt in the medium term. In this note, we summarize that framework and evaluate its implications in terms of the balance sheet normalization.

Before the global financial crisis, the Fed used to set a specific target for the overnight federal funds rate in line with its mandate (Chart 1). Under the conditions of liquidity shortage, it used to estimate banks’ reserve demand on a daily basis and adjust reserve supply through open market operations, thereby keeping the funds rate close to the target level. In that period, considering the liquidity conditions in the market, the Fed was successful in this (Chart 2). 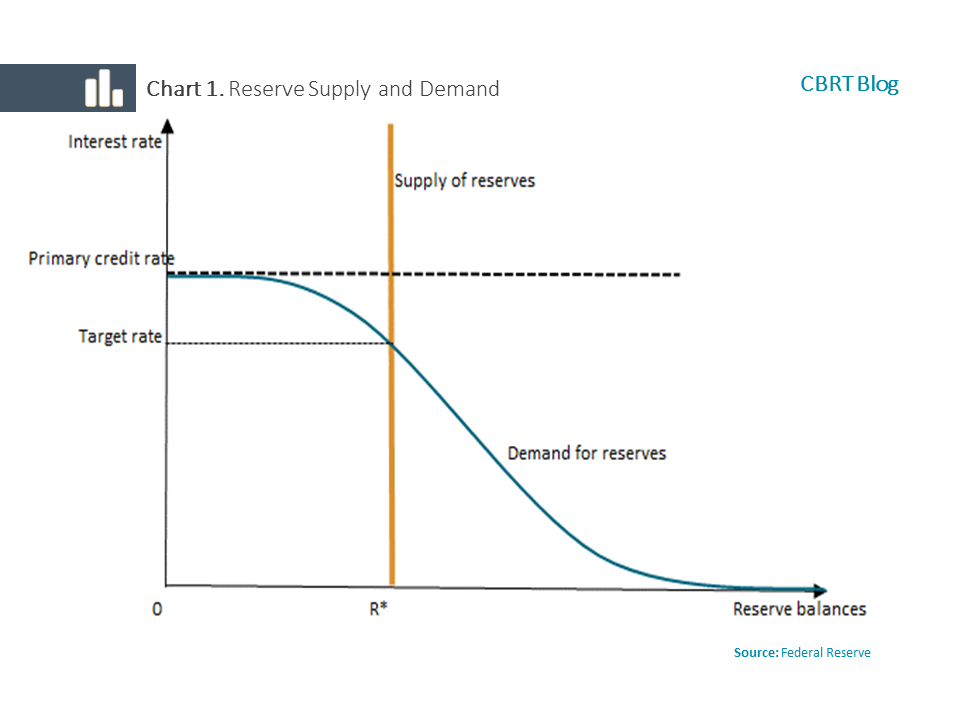 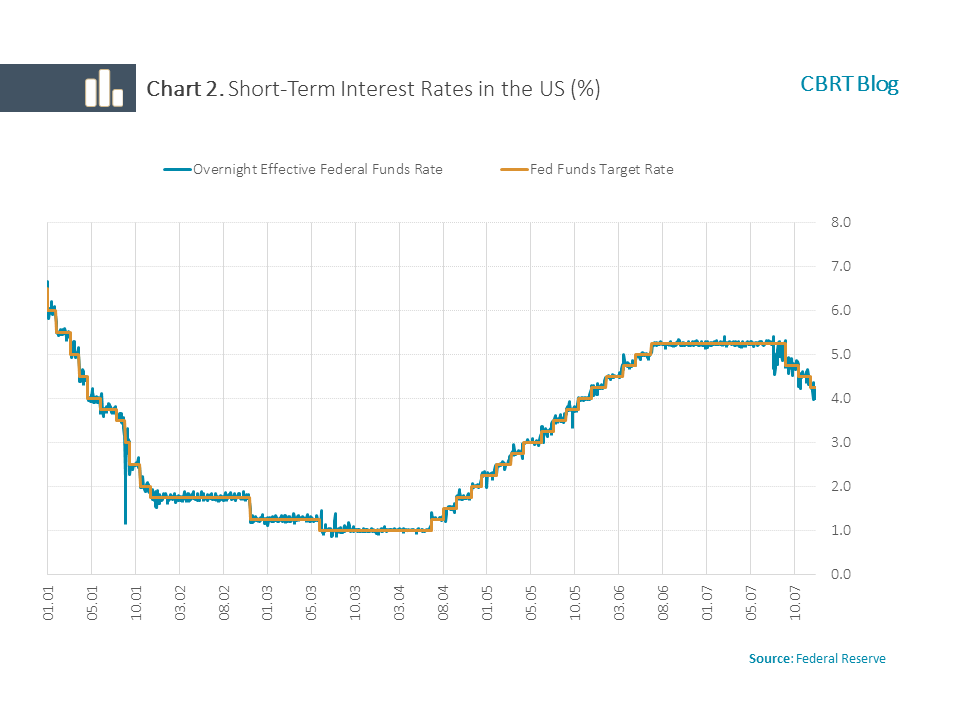 In the post-crisis period, due to asset purchase programs in particular, the size and composition of the Fed’s balance sheet changed substantially. Asset purchases led to a surge in the level of required and excess reserve balances.

Excess reserves of the banking system required the Fed to redesign its operational framework, hence the implementation of the interest rate floor system (Chart 3). However, the Fed started to have difficulties in controlling interest rates due to excess liquidity conditions in the market. As a result, in order to withdraw excess liquidity, the Fed’s primary step was to pay the same interest on required (interest on required reserves-IORR) and excess reserves (interest on excess reserves-IOER) of the banking system, thereby setting a floor for overnight interest rates. Additionally, the policy rate, which was previously announced as a specific target rate, was then announced as a target range. However, some of the institutions holding excess reserves, being unable to keep reserves at the Fed, could not sell those funds to the Fed at the IOER rate. This led the effective federal funds rates (EFFR) generally remaining below the interest rate charged by the Fed on excess reserves. 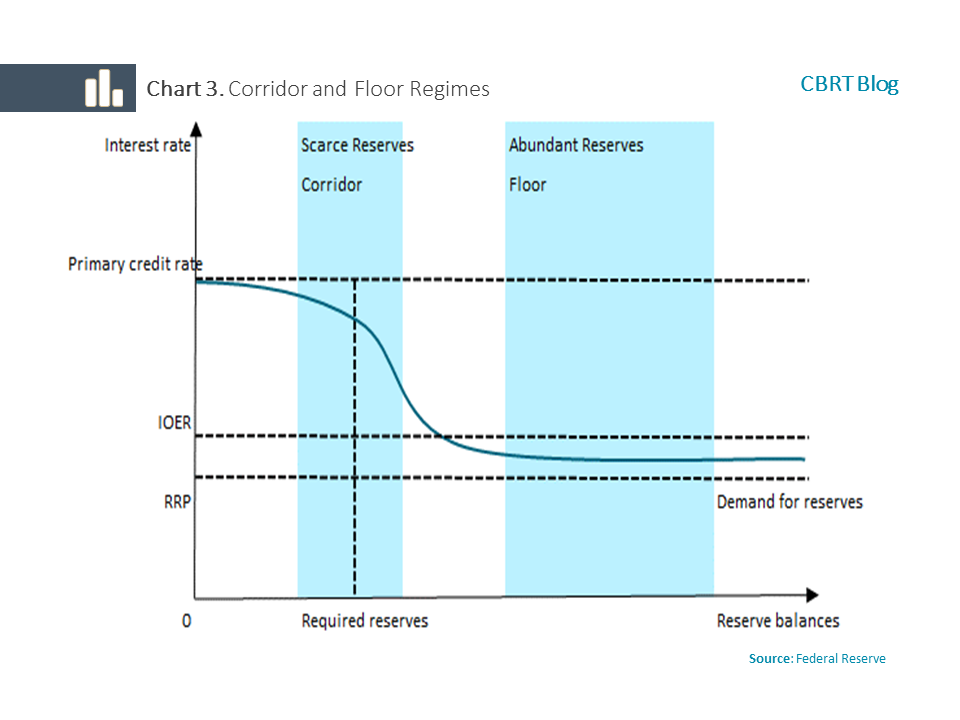 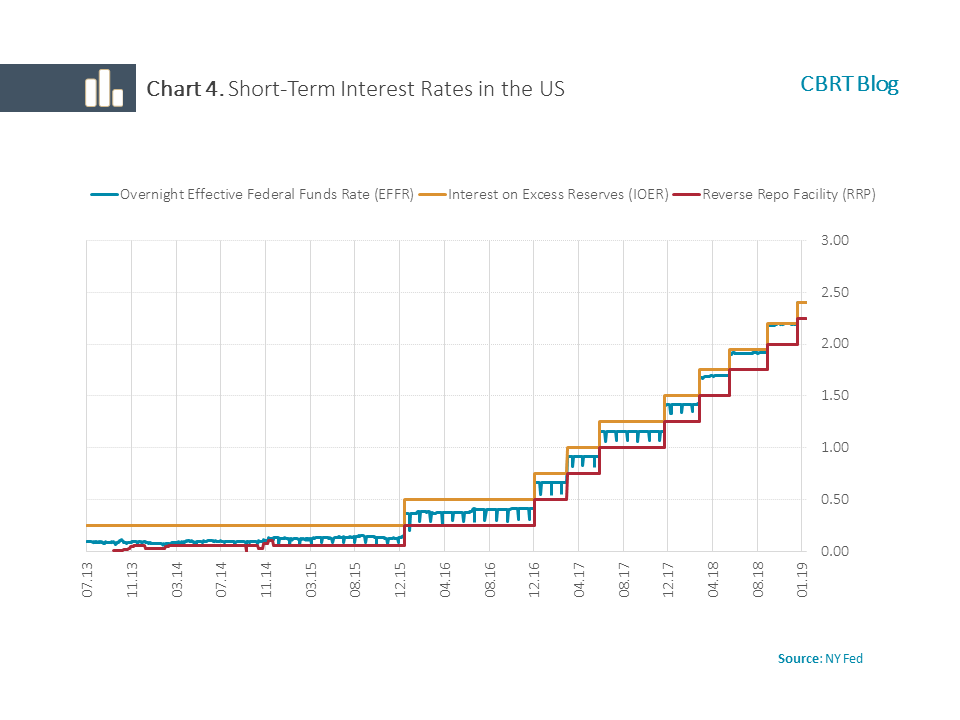 In 2013, after the Fed’s introduction of overnight reverse repurchase agreement (RRP) facility engaging more market players, the RRP rate started to act as a firm floor level for money market rates. All in all, the interest rate charged on reserves equaled to the upper bound of the target band. Thus, an interest rate corridor was formed, making the IOER rate the ceiling and the RRP rate the floor of this corridor (Chart 4).

Structure of the Federal Funds Market:

While the leading lender in federal funds market overnight transactions is the Federal Home Loan Banks (FHLBs), the leading borrowers are foreign and local banks. As FHLBs cannot make use of their excess funds at the Fed at the interest rate on excess reserves, they resort to repurchase agreements or money market operations. Once FHLBs sell their funds to banks on the federal funds market, banks earn returns against these funds at the IOER rate. Such an arbitrage facility leads the effective federal funds rates to fluctuate below the IOER. On the other hand, the reverse repurchase facility, which is also accessible by FHLBs, also prevents the market rate from falling below the RRP rate that is applied to such transactions.

Since the first quarter of 2018, overnight repurchase rates have increased relative to other market rates following the Treasury’s high supply of bonds. This has led to a rise in the federal funds market rates and become influential in narrowing the EFFR-IOER spread. Furthermore, the need for reverse repurchase transactions diminished due to decreased liquidity surplus and the Fed gradually lowered the IOER rate 15 basis points below the top of the target range for the federal funds rate.

As the normalization proceeds, the operational framework is likely to change, too. One major question here is at which reserve level the Fed would put a definite end to its balance sheet reduction in line with the adopted framework. Reserves and Treasury bonds, considered “safe assets”, act as a major banking sector tool in meeting the liquidity coverage ratio (LCR), which became more of an issue in the post-crisis period in particular[1].  The latest statements by the Fed have notably raised the prospects for keeping the floor system on hold, by taking into account also the LCR issue within the context of the new operational structure and leaving slightly more liquidity on the market.

The lender/borrower structure on the federal funds market (the fact that large local banks are in the need of borrowing to be able to meet liquidity coverage ratios or are unwilling to sell their excess funds) and the high concentration levels for excess reserves may also affect the rate of increase in money market rates during the Fed’s balance sheet reduction process. In their study, Afonso et al. (2018) claim that as much as the level to which the Fed would pull excess reserves down, the distribution of these reserves across banks also matters in terms of the formation of rates on the federal funds market. Their analysis concludes that in view of the high concentration of reserves and a weaker propensity to lend in the banking system to meet LCR targets, the Fed might put an early end to its balance sheet reduction program (Chart 5). 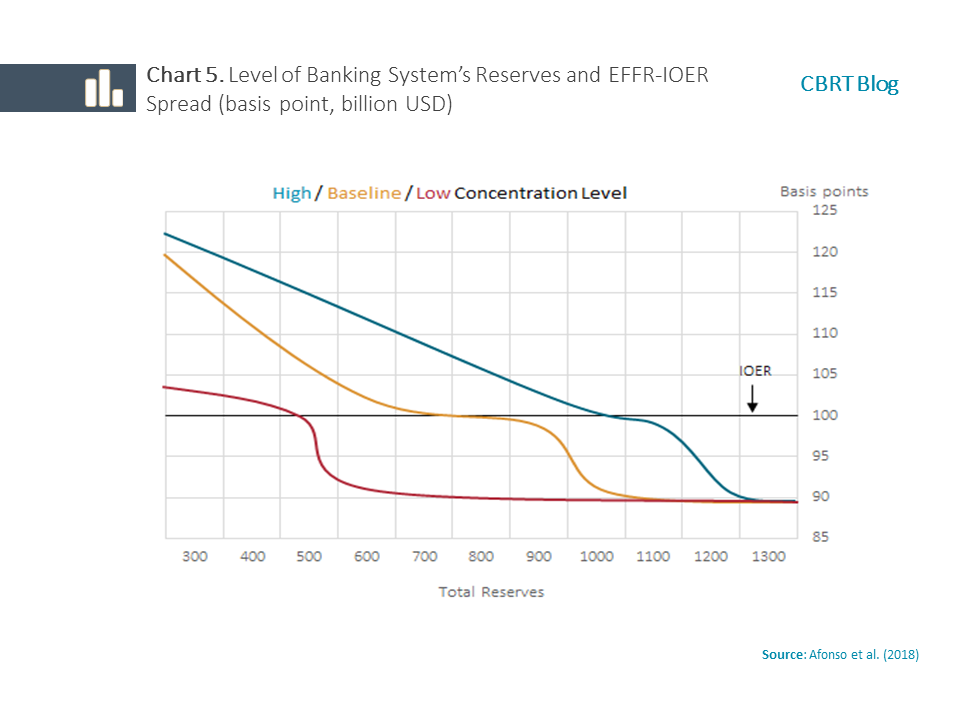 The reticent attitude of the Fed in its statements made so far on the details regarding what type of an operational structure will be deployed in the new system keeps both alternatives viable: either continuation of the current interest rate floor system or a full return to the pre-crisis system. However, it seems more likely after the latest developments that the Fed will continue to reduce the reserves down to a certain level and keep the current floor system on hold, which is considered a more positive alternative in terms of emerging market economies.

[1] Additionally, banks’ borrowing from FHLBs on the federal funds market makes an additional contribution to their liquidity coverage ratios, as FHLBs are not considered financial sector entities. While banks are borrowing from FHLBs due to this advantage, they can incur a higher interest cost. See Greenwood et al.  (2016).

Afonso, G., Roc A. and Benjamin L., 2018, “Size is Not All: Distribution of Bank Reserves and Fed Funds Dynamics”, Liberty Street Economics,

İsmail Anıl Talaslı is a Central Bank Specialist at the CBRT.