Ali Aşkın Çulha is an Economist at the CBRT.

Revenue and expenditure items in the budget change mainly depending on business cycles and discretionary decisions of public authorities. The discretionary decision component has a larger weight in most public expenditures whereas revenues are determined by business cycles. In general, business cycles do not affect all tax sources equally and some tax items are more sensitive to changes in economic activity. This situation creates fluctuations which make it difficult to track the fiscal policy stance via the budget balance. This blog post aims to draw a framework for cyclical features of tax revenues through an analysis of the direction and size of the sensitivity of main tax items to business cycles.

The findings of the study show that tax revenues in Turkey are affected by business cycles to a great extent and that they are procyclical (Table 1). 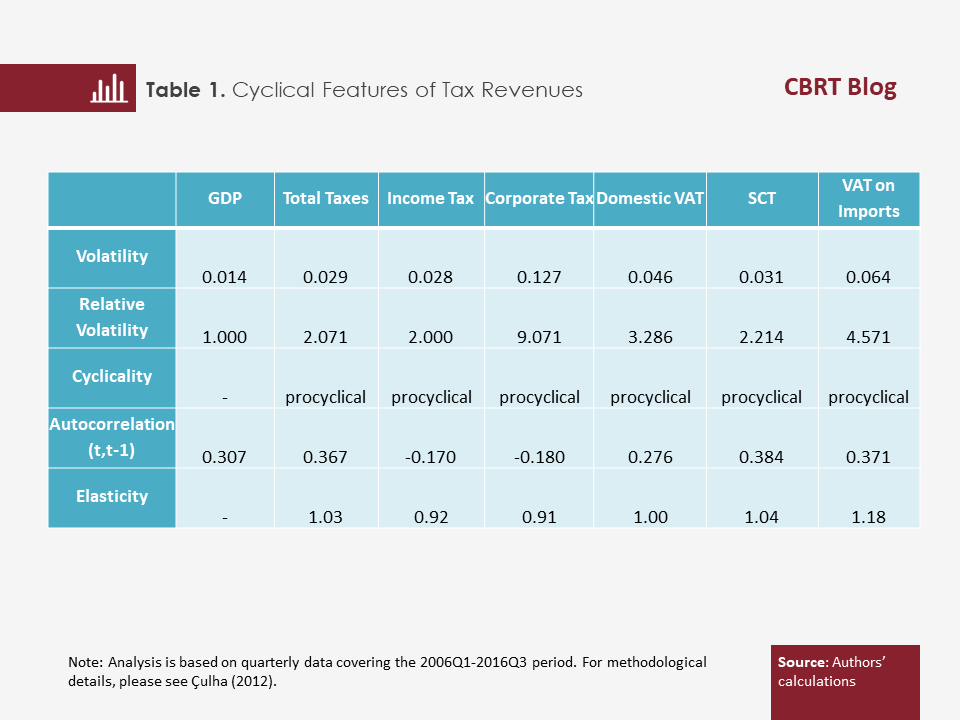 The findings suggest that the volatility of tax revenues is higher compared to real GDP, which implies that fluctuations in tax revenues, particularly in indirect taxes, are larger relative to business cycles. We can say that this is in large measure due to frequent changes introduced in the tax legislation. In addition, we see that tax revenues are procyclical, i.e. tax revenues and real GDP move in the same direction. This means that tax revenues decline in periods of economic contraction, and increase in periods of expansion.

The fact that the absolute value of the autocorrelation coefficient obtained for the cyclical component of the relevant variable is high shows that the cyclical component of that variable is more persistent. In this context, value added tax (VAT) on imports and domestic VAT, particularly the special consumption tax (SCT) among indirect taxes, are more permanently affected by business cycles. On the other hand, the relatively lower autocorrelation coefficients in income and corporate taxes indicate that direct taxes are less affected by business cycles than indirect taxes.

The tax elasticity coefficient refers to the percentage change that occurs in response to a one-percent change in GDP. The greater the elasticity coefficient is than 1, the more sensitive the relevant tax item is to business cycles and the more it is affected by changes in economic activity. In this study, elasticity coefficients of the income tax as an important direct tax item that accounts for around five percent of total taxes and the corporate tax that makes up nearly ten percent of total tax revenues are found to be approximately 0.9 percent. This means that both tax items will increase by approximately 0.9 percent in the face of a one-percent rise in GDP.

In Turkey, demand for imports is largely determined by domestic demand, in particular domestic investment demand, which makes VAT on imports very sensitive to business cycles. The elasticity of all three indirect tax items included in the analysis with respect to GDP is found to be 1.08 percent. This demonstrates that these three indirect tax items that account for approximately 55 percent of total tax revenues in Turkey are affected by the changes in economic activity to a great extent.

To sum up, all tax revenue items included in the analysis are procyclical, i.e. they move in the same direction as real GDP, and tax revenues are significantly affected by business cycles. While total taxes have an elasticity coefficient of 1.03 percent, the highest elasticity coefficient belongs to VAT on imports as the most sensitive tax item to business cycles, followed by the SCT and domestic VAT - other indirect taxes.

The findings of the study reveal that indirect taxes are more sensitive to business cycles than direct taxes. The fact that tax revenue items are highly sensitive to business cycles in Turkey is also important in terms of fiscal stance evaluations. Accordingly, analyses of the quality of fiscal policy should also take into account the changes in structural budget balance obtained by adjusting the budget balance for cyclical movements (Chart 1). 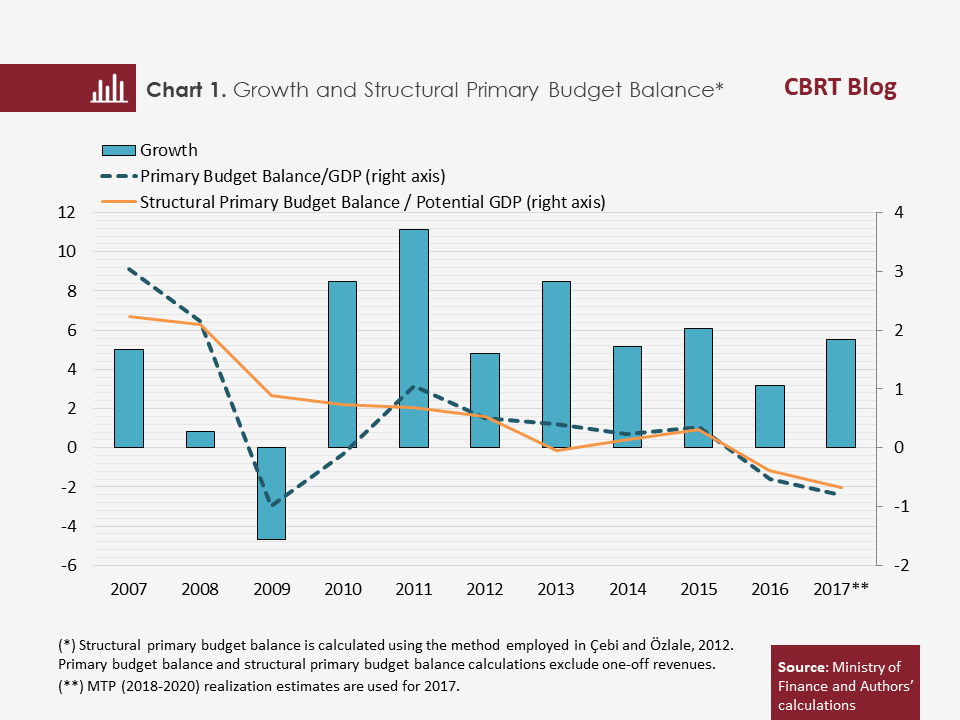 [1] Automatic stabilizers refer to public finance factors such as taxes (income and corporate taxes in particular) and transfers (unemployment insurance) that mitigate the impact of fluctuations in economic activity without a direct intervention from fiscal policy.

Ali Aşkın Çulha is an Economist at the CBRT.