Recently, the volatility in supply of food and food prices has been making it more difficult to design policies at the macro level, especially in developing countries. This volatility occupies a place on every policymaker’s agenda due to the widespread impact of the food sector on the general economy. The group that is most severely affected by this volatility is the low-income household group spending a significant ratio of their income on food; and when all the sectors that have a reciprocal relationship with the food sector are taken into account, it is more easily observed how large the impact horizon of the volatility in this sector is. That’s why taking measures that will make a favorable impact on the level and volatility of food prices is one of the issues that policy makers have been discussing recently. One of the foremost steps is defined as achieving increased agricultural productivity. The studies (World Bank, 2007; Abbott, Hurt and Tyner, 2008; Trostle, 2008; Alston, Beddow and Pardey, 2009; and Dorward, 2013) suggest that an improvement in agricultural productivity positively effects  food supply and the level and volatility of food prices.

The agricultural sector is a very important sector in most countries and Turkey is no exception. The recent elevated level and volatility in food inflation damages the general inflation outlook, aggravates healthy price formation, adversely influences pricing behavior by increasing inflation uncertainty, leads to stiffness in inflation expectations and reduces room for maneuver of monetary policy. Considering the fact that food inflation accounted for approximately 20-30 percent of overall annual CPI inflation recently, it is evident that decreasing the level and volatility of food inflation would bring about important gains with respect to social welfare and monetary policy.

Utilization of high technology and modern equipment in agriculture brings about production growth. As the income structures of agricultural producers are not stable enough to realize the investments with their own funds, their working capital and investment needs are supported with loans.  While access to technology and equipment in agricultural production is determined by the producers’ borrowing capacities, this capacity is highly dependent on the development level of agricultural banking. A developed agricultural financing system provides the producer with technical assistance when needed while purchasing technological machinery-equipment, choosing fertile farmland, construction / modernization of facilities, construction of irrigation structures and purchasing seeds/ seedlings/ livestock. In other words, agricultural producers’ access to loans significantly contributes to agricultural growth. Therefore, achieving an operational agricultural credit mechanism is very important for an economy. 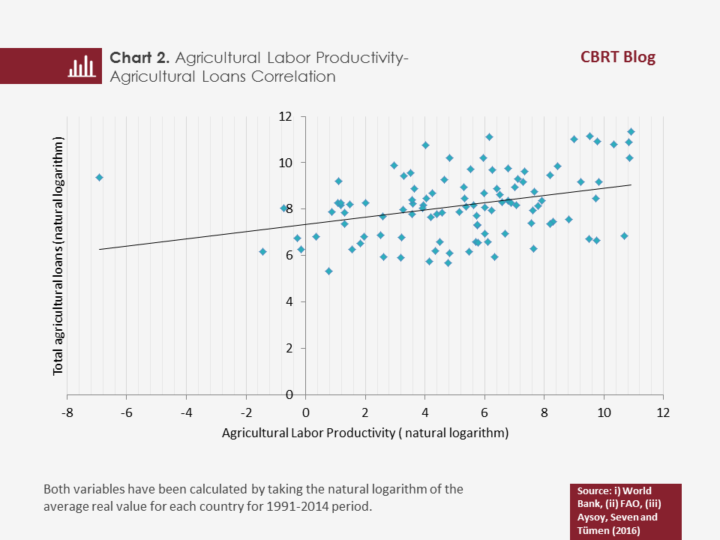