The output gap, in the simplest terms, is defined as the difference between the actual output of an economy and its potential output.

Çağlar Yüncüler is an Economist at the CBRT.

Inflation-targeting central banks follow all relevant indicators for inflation analysis and forecasting. Among these indicators, the output gap is one of the most important. The output gap, in the simplest terms, is defined as the difference between the actual output of an economy and its potential output. At this point, it is useful to clarify what exactly we mean by potential output. From the perspective of monetary policy, the potential output refers to the highest level of output that can be attained without leading to an increase in inflation by efficiently using labor and capital with the given level of technology.

Why is it important?

An output gap suggests that resources in an economy are not allocated efficiently. A negative output gap occurs when actual output is less than what an economy could produce at full capacity.  A positive output gap suggests that the economy is overworking its resources to increase production. Let’s take the second case as an example, i.e. when the actual output is more than the potential output. In such a case, input costs increase as the economy is overworking its resources. This pushes prices up and increases inflation. During such periods, the monetary policy is expected to serve as a barrier against a further rise in inflation by balancing the demand-side pressures; whereas in the opposite situation, it is expected to be implemented in a way to stimulate the economic activity and to ease financial conditions. Fiscal policies, too, can be implemented in a contractionary or an expansionary way to help the output converge to the potential. Briefly, the output gap is a useful indicator for central banks to understand and forecast demand-driven inflationary pressures.

How is it measured?

There are diverse methods to measure the output gap. The first one is the production function approach, which is an economic approach. In the context of this approach, production is defined as a function of factors such as technology, labor and capital. Trends of these factors are estimated separately to yield the main trend of production. Deviations from this trend are described as the output gap. Secondly, it is possible to estimate the output gap by using statistical approaches such as univariate and multivariate filters. The most widely-used one of these is the Hodrick-Prescott (HP) filter. Multivariate filters estimated with the Kalman filter are also classified in this group. Finally, calculations based on survey indicators, the definitions of which are similar to the output gap, are also possible. Examples of these indicators are the capacity utilization rate and the level of demand compared to its normal.

Which indicator is better?

Each method has its pros and cons. It is therefore not appropriate to firmly prefer one over the other. For instance, the production function approach and statistical approaches are based on the decomposition of output into trend and cycle components. While the methods used for this decomposition are preferred for their ease of use, they fall short of determining the true trend of data pertaining to the recent period (the end-of-sample problem). Chart 1 shows the application of the HP filter for Turkey, where the level of the estimated gap changes with each new data. 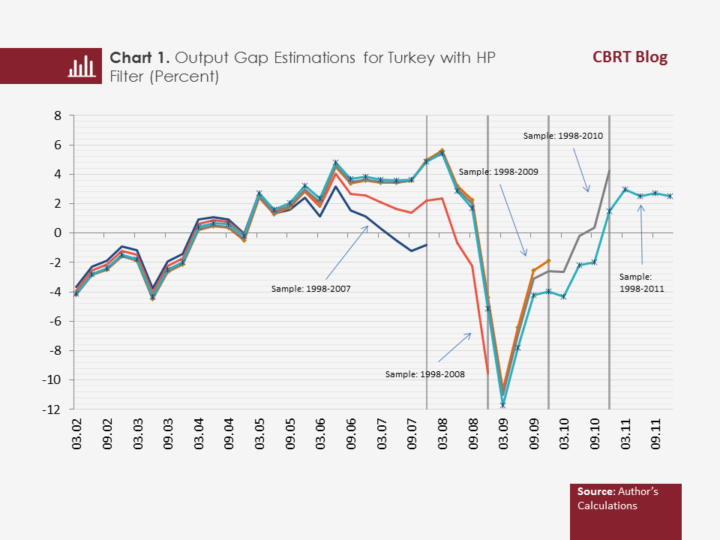 There is no such a problem in estimations based on survey indicators. However, this methodology has its own reservations on whether the questions were evaluated accurately by survey participants and whether the survey was representative enough. Therefore, one should bear in mind that different methodologies and different time spans might give different results for the output gap estimation. The most risky situation for the monetary policy is the likelihood of making a wrong policy decision due to a failure in measuring the recent trend and cyclical movements. To avoid this as much as possible, results provided by different methods should be evaluated together. For instance, in Chart 2, output gap indicators for Turkey calculated by different methods can suggest different levels[1]. However, it should be noted that similar turning points are registered by all the indicators. 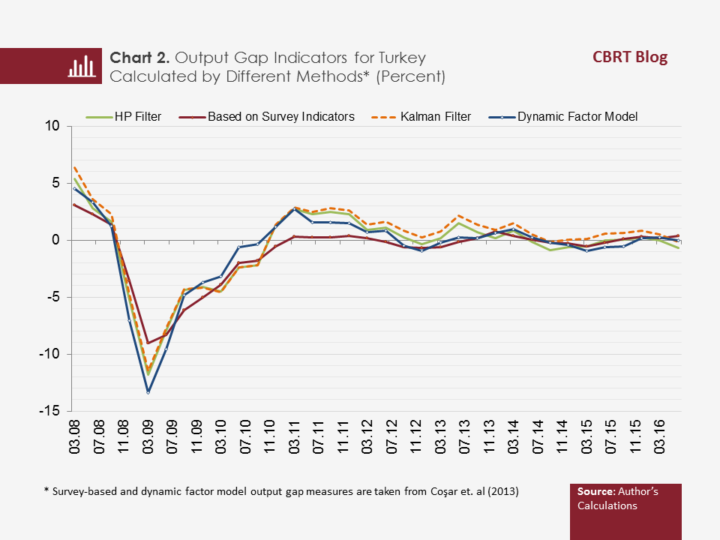 The trends obtained from statistical methods are assumed to be good estimators for potential output. Nevertheless, it cannot be a definite measurement due to the aforementioned problems. Even so, if we look at the trend given by the HP filter in Chart 3, we see that the growth rate of potential output in Turkey has not been constant over time. This can be attributed to the fact that supply-side factors such as the factors of production and the speed of technological developments that determine the efficiency of these factors can also change over time. Besides, demographic developments, labor market developments and the course of physical, human and technological investments can also be influential. Internal and external shocks that countries face can also affect the potential output. Particularly the recent slowdown in Turkey’s potential growth has been driven by the fall in productivity growth, the waning investment appetite due to the weakening in global economy and geopolitical developments in the aftermath of the 2008 crisis. 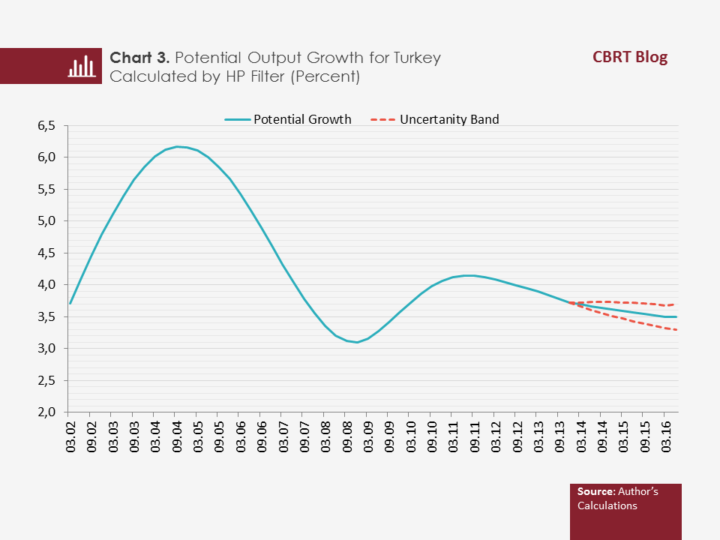 Might there be alternative indicators to the output gap?

There might be. Especially after the 2008 crisis, financial stability also became an objective for central banks and this increased the importance of other indicators in shaping monetary policy practices. Indicators such as capacity utilization rate, the unemployment gap, which is defined as the difference between the nonaccelerating inflation rate of unemployment and the actual unemployment rate, or the credit gap derived from financial variables can also be used for similar purposes. Thus, besides goods and services market, labor market and financial cycle-driven pressures can be monitored. When we look at Turkey’s case, we see that these indicators behave similarly to the output gap (Chart 4). 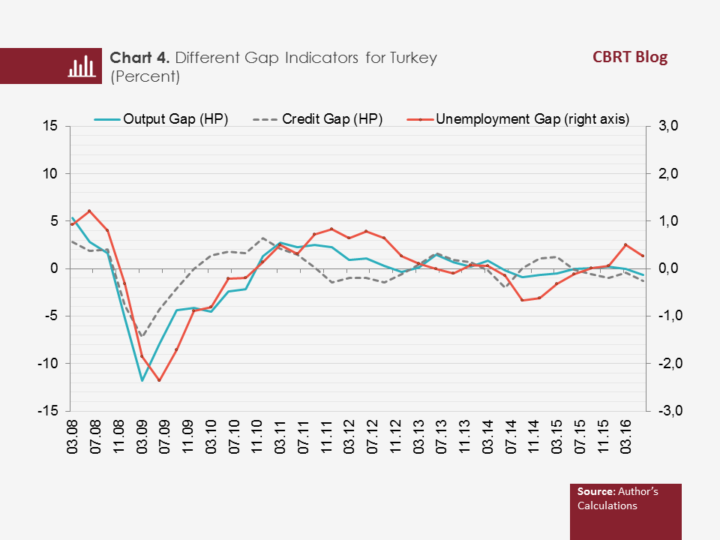 The moral of the story

In consequence, the output gap is an important indicator that allows central banks to monitor demand-side pressures. However, considering the measurement challenges, it is equally important to address different methods and indicators as a whole while implementing the monetary policy.

Çağlar Yüncüler is an Economist at the CBRT.