The fact that the effectiveness of fiscal policy increases in low-growth periods enables the implementation of countercyclical expansionary fiscal policy without a lasting deterioration in fiscal discipline.

Kazim Azim Özdemir is a Senior Economist at the CBRT.

Expansionary fiscal policies have recently regained momentum in many countries as a means to boost the economic growth and curb unemployment. In addition to the monetary policy and incomes policy, the fiscal policy also plays an important role in shaping economic balances. While the fiscal policy endeavors to achieve a number of goals such as increasing employment, ensuring economic growth, improving income distribution, sustaining public debts and contributing to price stability, it uses public spending, tax revenues and debt management as a policy instrument. Within this framework, the policy debate centers around an increase in public spending and/or a decrease in tax rates to boost growth rates and curb unemployment. Both policy instruments have different implications for economic activity. Moreover, impacts of the sub-components of public spending and tax revenues on the national income also vary. This post examines the effect of public spending on growth together with the fiscal multiplier analysis, and discusses the effectiveness of expansionary fiscal policies on public consumption and investment expenditures under different growth regimes (low/high growth episodes).

What Is the Fiscal Multiplier?

The Fiscal Multiplier is defined as the effect of a one-unit exogenous change in government spending or tax revenues on national income. The size of the fiscal multiplier is important in analyzing the effectiveness of fiscal policy on economic activity.  Academic studies cite plenty of factors influencing the effectiveness of fiscal policy. These studies indicate that the size and sign of the fiscal multiplier depends on the state of the business cycle, the exchange rate regime, the openness of trade, the nature of fiscal shocks, the coverage of automatic stabilizers, the fiscal balances, the monetary policy stance, the robustness of the financial system and uncertainty (Batini et al., 2014). At the same time, many studies indicate that the multiplier effect of the fiscal policy increases in times of economic recession, as suggested by many country experiences (Baum and Koester, 2011, Auerbach and Gorodnichenko, 2012). Furthermore, there also exist studies suggesting that the size of the fiscal multiplier might be larger in countries with low debt (Huidrom et al., 2016). It is therefore important to accurately assess the state of the economy to determine the effects of these measures on economic activity when using fiscal policy instruments.

The study by Çebi and Özdemir (2016) analyzes the sensitivity of the fiscal multiplier to business cycles in Turkey over the 1990Q1 – 2015Q4 period. To this end, business cycles are classified as low-growth and high-growth episodes by analyzing how the respective GDP departs from the long-term national income growth, and accordingly, the fiscal multiplier is estimated for each episode by the local projection method. The findings of the study show that the effectiveness of fiscal policy increases during low-growth episodes (Chart 1). The impact multiplier is computed as 1.73 in low-growth and 0.85 in high-growth periods. On the other hand, the one-year cumulative multiplier is 1.79 and 2.28 in high-growth and low-growth episodes, respectively. Hence, increases in public spending provide a major contribution to growth, and this contribution is sensitive to business cycles. These findings prove that fiscal policy is an effective economic policy instrument in the short-term and that the size of the fiscal multiplier is often larger than 1.

Another important point for the policymaker is to identify which economic policy instrument is more efficient to meet economic objectives. A breakdown of public spending by its components reveals that the public investment multiplier is higher than the public consumption multiplier in both episodes. This finding supports the view that an expansionary fiscal policy building on public investment rather than public consumption will have a more profound effect on national income. However, the cumulative multiplier values also indicate that the effect of public consumption on GDP cannot be ruled out in low-growth periods (Chart 1). 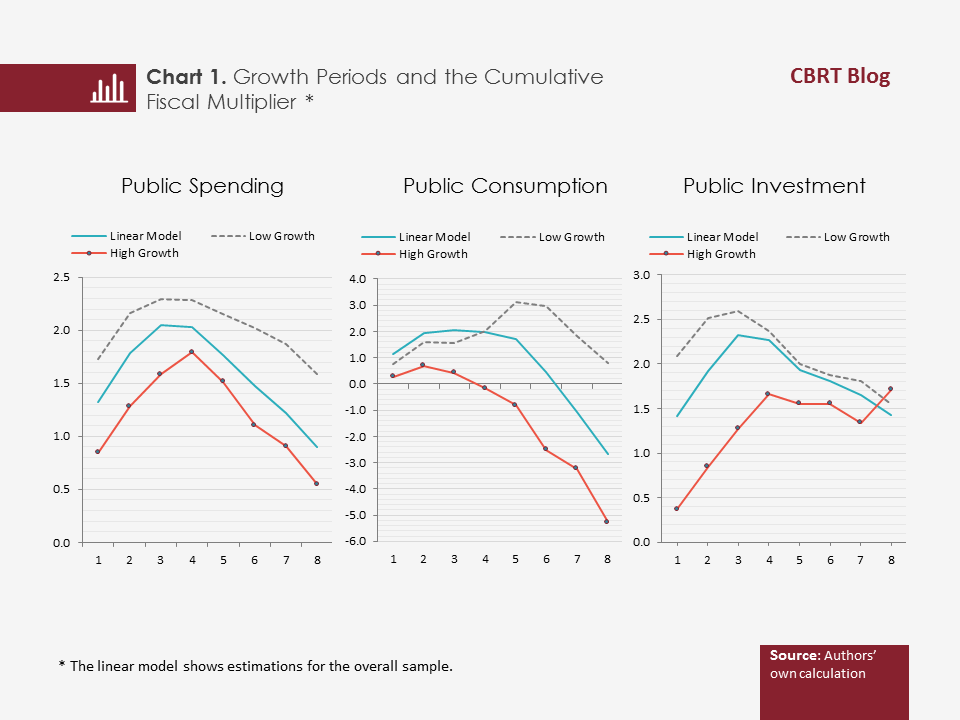 The fiscal policy outlined in the 2017 budget involves a framework in which current spending is kept down and growth-stimulating spending is mostly boosted by public investments. Considering that the public investment multiplier is often higher than the public consumption multiplier and particularly higher in times of low growth, a re-distribution of public spending in favor of public investment would stimulate economic activity more strongly. Moreover, as an effective economic policy instrument for the short and medium-term management of aggregate demand, public investment can be influential on the supply side of the economy over the long term, and thus, prioritizing public infrastructure investments in the 2017 budget is anticipated to help increase the potential output of the economy in the long run.

*This study has been published as a Box in the Inflation Report 2017-I.

Baum, A. and G.B. Koester (2011), “The Impact of Fiscal Policy on Economic Activity over the Business Cycle- Evidence from a Threshold VAR Analysis”, Deutsche Bundesbank Discussion Paper, 03/2011.

Kazim Azim Özdemir is a Senior Economist at the CBRT.