Duygu Güneş İnal is a Central Bank Specialist at the CBRT.

Ferhat Çamlıca is a Director at the CBRT.

Trade in local currencies has come to the fore and gained importance particularly after the global financial crisis in 2008. In this period, the difficulties in financing of international trade and the sharp fluctuations in exchange rates urged emerging economies to quest for novelties in foreign trade. Trade in local currencies came to be regarded as an alternative way to solve these problems and many countries started taking important steps to realize this goal.

In international trade, a growing number of countries are choosing to use their own currencies rather than the US dollar or euro. Trade in local currencies is preferred especially as a hedge against the exchange rate risk that occasionally creates uncertainties for the corporate sector. 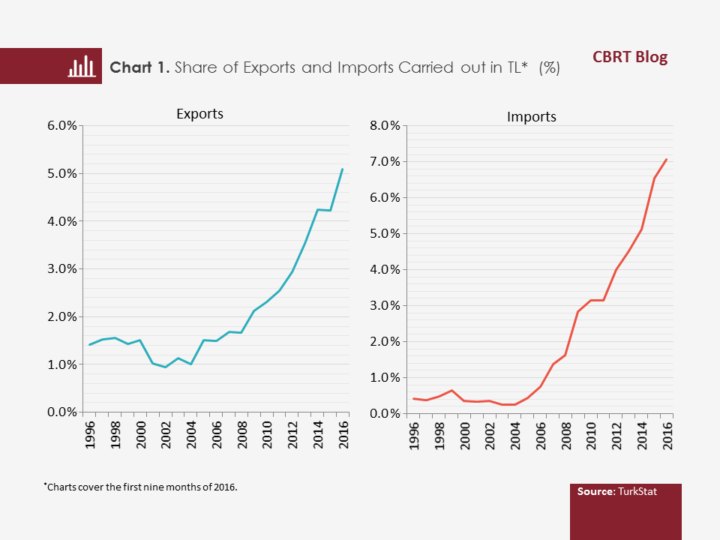 Turkey carries out foreign trade in Turkish lira mostly with peripheral countries (Table 1). Nevertheless, local currencies are also used in trade with EU countries such as Germany, Italy, France and the United Kingdom especially on the imports side. It is estimated that these countries prefer the Turkish lira because of their subsidiaries or branches in Turkey. Meanwhile, with respect to the relative weights of countries, the share of the top ten countries in exports in TL is 70 percent, while the share of the top 10 countries in imports in TL is 67 percent. 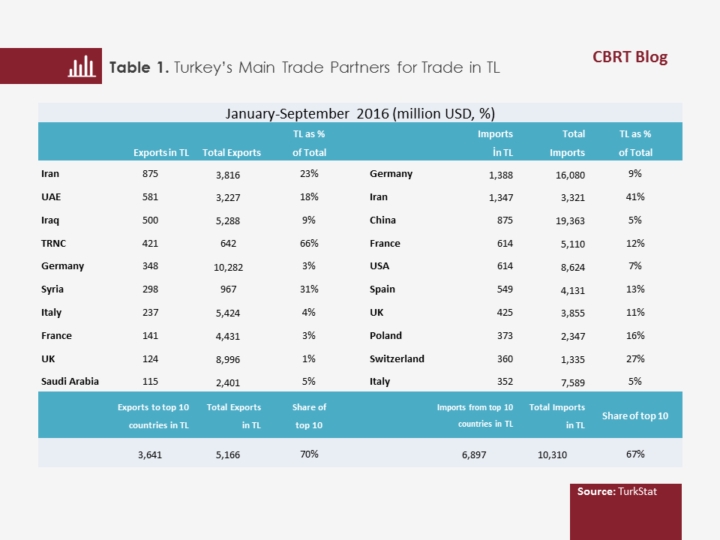 Through these agreements, the countries aim to:

The People’s Bank of China, with the swap agreements it signed with various countries, acts as a pioneer in foreign trade in local currencies[1]. On the other hand, within the framework of the Local Currency Payment System (Sistema de Pagos en Moneda Local- SML) of MERCOSUR[2], the Common Market of the Southern Cone, the steps taken by Brazil and Argentina with regard to foreign trade in local currency stand out as other reflections of similar efforts deployed by emerging markets in particular.

In order to encourage trade in local currencies the Central Bank of the Republic of Turkey signed currency swap agreements with the Central Banks of Pakistan and China in 2011 and 2012, respectively. Moreover, endeavors to conclude swap deals with other trade partners are also under way. Currency swap deals are deemed important in terms of both promoting the international use of the TL and contributing to the growth of the country’s trade volume.

In conclusion; international trade in local currency has a significant potential. Bilateral agreements signed by central banks can play an influential role in the growth of the volume of foreign trade in local currency in the periods ahead.  Furthermore, such deals already concluded among a few countries may set the ground for future regional collaborations in this regard.

[1]  The international use of Chinese renminbi (RMB) has grown dramatically in recent years. In 2015, 23% of China’s total imports and exports were settled in the RMB. The RMB ranked as the world’s fifth international payments currency in October 2015, a remarkable rise from 35th in October 2010.

Ferhat Çamlıca is a Director at the CBRT.

Duygu Güneş İnal is a Central Bank Specialist at the CBRT.